I am feeling very much loved right now. And that includes both the warm-and-fuzzy and the cold-hands, butterflies-in-the-stomach aspects of that emotion.

It started at Ignite Portland, where I presented the five-minute version of my Mars talk in front of about 600 people. The feedback on my talk at the event, on Twitter, on the forums, and from my MDRS crew and others who watched it on YouTube has been most gratifying.

The next day we headed to Seattle for Potlatch, which was as usual filled with lovely people, both old friends and new, and we had many fine conversations and excellent meals. I was amazed by the number of people who came up to me to say they liked my work, even people I barely knew or didn’t know at all. The “Writing the Other” panel on Friday evening went well, and then at the auction Saturday night I got to do the Happy Snoopy Dance for a bid of over $100 many times — including when my MDRS mission patch and “Mars” rock went for $120. Color me astonished!

The peak of the weekend for me came at brunch on Sunday, when I presented the 30-minute version of my Mars talk. People laughed in all the right places, there were tons of excellent questions, and I was just bowled over by sustained applause at the end of it. After that several people came up to me to talk about presenting my Mars talk at other events (I’m told that one person from Wiscon said to someone else “we’ll have to be sure to get a big room for it!”). Some of those discussions are beginning to bear very exciting fruit, which I hope to be able to report on soon.

Online, I participated in a “Burning Question” discussion at the blog of Laptop Magazine, in which several SF writers answered the question “Which Technology Makes You Feel Like You’re Living In The Future?”. (Thanks to K. Tempest Bradford for the invitation.) That’s nice enough, but then the editors of Laptop liked the results so much that they decided to print it in the May issue of the paper magazine. And then Annalee Newitz at io9 picked up one paragraph I wrote in that about “techno-snot” and called it out for a whole article on its own. This attracted the attention of Dearbhaile Heaney, an MA student at the Royal College of Art in London, who is working on an art project investigating the social and cultural perceptions of “goo” and emailed me to pick my brain about the issue. I wound up writing a 300-word flash piece about a fictional techno-goo for the project.

On and on the connections and the links go. There’s more in the works, and I’ll let you know when I have the details.

It’s amazingly cool to be at the center of attention like this, and yet it’s also scary and nerve-wracking. Although I’m a big ham, performing takes a lot out of me and I have to retreat to a dark room for a few hours afterward to recuperate. I imagine this is a tiny taste of what it’s like to be Neil Gaiman. It’s exactly what I’ve always wanted, but I’m also kind of hoping it will slack off and get back to normal soon. Looking at my schedule for the next few months, though, I’m not sure that it will.

The business of being a famous Marsonaut has also interfered with the business of writing. I’ve written barely half a short story since the beginning of 2010. I’ve also received a couple of very disheartening rejections recently. But when I look at all these accolades and awards I know that I am capable of writing work that makes people smile. I fully intend to get back on the writing horse this month. 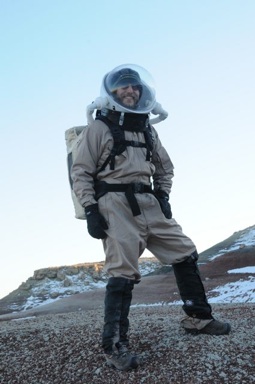