Back to Cosmic Images

All photos taken by and © Bruce G. Marcot.

Why I was never selected to go to the moon:
What I would have said if I was the first
human ever to step on the moon:
"People, if you don't find everlasting friendship
with everyone else on Earth, you are doomed,
and it's your own goddamn fault."

Our Moon ... from various phases and locations ...

Hunter's moon -- taken October 2006 while floating the Luilaka River at night, listening to owls, in the heart of the Congo River Basin.

The moon at that time was at perigee and 12 percent larger than normal ... rising through the jungle, big and orange, as also shown in the next two photos ...

Some day we will return ...

Tycho in a cratered landscape -- The prominent crater is Tycho, showing the emanating rays left over from the collision that formed it. The moon was in a waxing gibbous phase at this point. Compare this photo to the next one.

Full moon, no features -- This is the same view as the above photo, except the moon here is full. The high angle of incidence of sunlight during a full moon means there are few shadows, and surface features become washed out and take on a mother-of-pearl appearance.

The prominent crater with the central peak, on the left edge of this image (at the 10 o'clock position) is Gassendi, on the north (top) edge of Mare Humorum. The smaller, bright crater with the central peak near the center of the image is Bullialdus. At the very bottom, the straight ridge is actually a wall of Schiller crater seen obliquely toward the edge of the lunar disk. North is toward the top.

The dark oval crater is Plato, an ancient crater 60 miles in diameter that is likely filled with old lava flows. The dark "sea" below Plato is Mare Imbrium (north is to the top).

Back to Cosmic Images 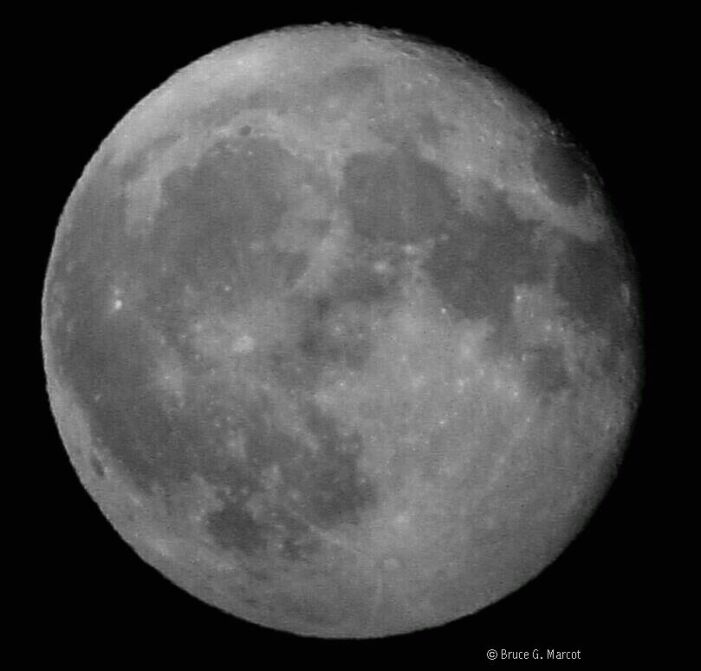