Part 2. What Tracks Are These?

Part 2. What Tracks Are These?

Let's switch gears. And in so doing, I will reveal my own interpretation of these mystical tracks.

What walked here? is this a common question asked by any field-going wildlife biologist or naturalist? I will narrow that question to a set of animals whose tracks are just big enough, just humanoid-like enough, and variable enough to solicit some possible confusion among non-experts.

And those animals are simply enough the species of the family Ursidae or bears.

Let's take a look at some bear tracks. Specifically, let's first look at a set of drawings -- all done by professional wildlife biologists in published science books -- of one aspect of bear tracks. That is, that bears, of different species in different parts of the world, commonly overstep their own tracks, or step in the same tracks made by other individual bears or by themselves.

Each of the 4 tracks shown here consists of two overlapping tracks -- the track of the longer hindfoot overstepping and partially obscuring that of the shorter front foot. American black bears do not always do this, but they do it often enough so that field biologists need to know to watch for this pattern.

I have seen this myself many times. Here are three photos I took in the Klamath Mountains of northwestern California, of American black bear tracks showing this overstepping pattern:

I took the above photos along the wet mud shoreline of inland ponds, on Six Rivers National Forest, in mixed conifer-hardwood forests of Douglas-fir. The first photo does show that the bear stepped with its hind feet into the tracks of the front feet. The second photo doesn't quite show this overstepping, but on the left pair, the shorter front foot (with a 6-inch ruler next to it) is trailed by the longer hindfoot. If the hindfoot came up just a bit further, it would appear as one long intermingled print. The right print is clearly just the front foot alone. The third photo shows the overstepping pattern and could be interpreted as made by a much larger foot. Only when I inspected other prints in the same track sequence did it become clear that this was made by a black bear stepping in its own tracks -- hindfoot over the front footprint -- in soft mud, as they often do.

And other bear species do this too.

In the Far East of Asia (and elsewhere) roams the huge brown bear (Ursus arctos), one form of which is the grizzly bear of North America. A Russian field wildlife biologist by the name of Dimitri Pikunov has documented the same kind of overstepping pattern in brown bears of the Russian Far East, and has produced the following diagrams (from Oshmarin and Pikunov 1990) taken from actual tracks he observed in the field:

I have also encountered tracks of Himalayan black bears (Ursus or Selenarctos thibetanus) in the Himalayas of India and in the Russian Far East. Keep in mind that this species also ranges into the Garo Hills of Meghalaya in India, where we discovered that legend of Forest Man or Matdngdng. Here are some photos I took of their tracks (called "pugmarks" in India and elsewhere) along the upper Bikin River in Primorski Krai, Russian Far East:

Himalayan black bears, too, can overstep their tracks, as shown in the following photo I took in Khedrovaya Pad Zapovednik (reserve) in Primorski Krai, Russian Far East:

I might mention here that, after I wrote the above passages, I found a very similar idea in a book by Nicholas Saunders (1995) called Animal Spirits. On tracks of the Yeti and Bigfoot, Saunders wrote:

"...the photographic evidence is not conclusive as very large footprints are sometimes produced by mountain bears. When traveling at a lope, bears place their hind feet partly over the imprints of the forefeet to produce tracks which look as if they were made by a large bipedal animal." (p. 144)

So the plot now thickens. Travel next to:

While I was recently in India, I discussed the tracks of Yeti with some of the wildlife researchers of the Wildlife Institute of India in Dehra Dun in the Himalayan foothills of Uttar Pradesh state. They noted that when Himalayan brown bear traverses downslope in snow it often slides its feet and steps in its own tracks or oversteps its own tracks, creating huge, bipedal-appearing "pugmarks." While this is not proof that the Yeti does not exist, it is a caution to interpret any such indirect evidence very carefully... 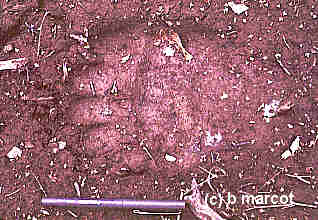