By now my hand is tipped and you should be way ahead of me.

It is my interpretation that some, maybe many, tracks of Bigfoot and its global cousins, as reported earnestly by honest people (thus, excluding the hoaxers), are probably tracks of large wildlife ... and most likely bears that are simply enlarging their own tracks by sliding, by overstepping, or by having their tracks enlarged through weather effects. My little study here pertains mostly to the overstepping phenomenon.

Let me demonstrate this most graphically.

Let's first take the case of Forest Man (Matdngdng) of the Garo Hills of Meghalaya, India. Here, I have cut out the individual front and hind tracks from my own photos of Himalayan black bear, resized them to the same approximate scale and overlaid them semi-transparently over the plaster cast of the supposed Matdngdng track I photographed in my Indian colleague's cottage in the Garo Hills. Here's the result, showing the untouched photo of the original cast on the right for comparison:

The fit is rather striking.

Next, let's do this with the drawings of the brown bear tracks. I clipped one of the tracks from the first brown bear drawings (by D. Pikunov) presented earlier, and enlarged it the same relative scale and superimposed it over two of the photos of the supposed American bigfoot tracks. Here are the results, again with the untouched photos on the right.

In general, the shapes seem to fit rather well, allowing for some minor realignment of the toes. The size of brown bear tracks are larger than those of American black bears, so this little experiment should be redone with more precise measurements of actual casts and tracks. But the shape here seems to fit rather strikingly. Whether those supposed Bigfoot track casts were taken within the range of the brown bear, I do not know; but I would surmise that they are at least within the range of the American black bear.

So finally, let's bring it back to North America. I clipped one of the tracks from the American black bear drawings (Murie 1975) presented earlier, and enlarged it at the same relative scale and superimposed it over one of the photos of a supposed American Bigfoot print. Again, given that the original track is unclear in wet mud, the fit is plausible:

Let's not forget the need for rigorous thinking. I really don't want this to be mere trickery of computer images. This analysis needs to be done quantitatively and far more carefully than my quick evaluation here presents. [Note: After first posting this Web site, I received an unsolicited e-mail from the photographer of the orange-colored track presented above; he told me that my assessment is plausible, that he appreciated seeing this evaluation.]

What can we really conclude from all this about the existence of Bigfoot and its worldly relatives?

Part 4. Conclusions: Is There Proof? 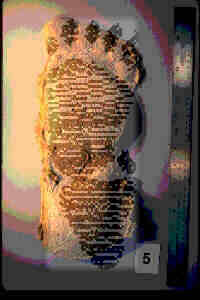