Part 4. Conclusions: Is There Proof?

This little exercise does not "prove" that there is no Bigfoot or its cousins.

It does remind me that tracks can be deceptive (I've surely puzzled over a number of carnivore tracks myself). And that at least some tracks honestly reported as from Bigfoot and friends may very well have been made by bears or other large animals in unusual patterns as I have demonstrated.

In science, we strive to use the simplest and, to paraphrase Occams' razor, the least bizarre explanations first. Only when they prove inadequate is it time to move on to more involved explanations. This is the tried and true scientific Principle of Parsimony.

I suggest that some of the tracks may be caused by known agents including bears or other large wildlife. However, I venture that this explanation does not cover all reported Bigfoot tracks.

As for evaluating the other evidence -- the reports of visual sightings and encounters, the tribal legends, the supposed nests, and taped calls ... well, we have to leave something to do tomorrow, don't we? And I still hope that some evidence out there may one day reveal an evolutionary cousin we lost along the way...

In this paper, published in a reputable scientific journal, the author presents results of his findings that a plaster track cast of a large unknown animal contained dermal ridges -- those lines that form your fingerprints. How they got onto the cast, and what made them, is unknown.

Want to see a masterful analysis of tracks and gaits and comparisons with known primates? This is it. It is also a major photographic analysis of the Patterson film -- about as far as such an analysis can be pushed scientifically, in my opinion. It concludes that there is neither evidence supporting nor disproving the Bigfoot phenomenon, including the Patterson film. Which is a nice way of saying that we cannot rule out possibilities.

[2003 update: this past year, various news media ran stories suggesting confessions by culprits in devising the Patterson film. If this is true, then the analysis used in this report is still a lesson in the scientific method: failing to falsify a hypothesis does not mean that the hypothesis is "proven" true, only that there is no evidence by which it is demonstrated to be false.]

On the Yetis of the Himalayas

I have just viewed a video showing a snow leopard striding in belly-deep snow in the Himalayas. The cat was quite clearly walking in its own tracks, the hindfoot stepping into, and sometimes slightly just behind, the track made by the front foot. The result was a set of elongated tracks that looks remarkably like a side-to-side bipedal track.

Other big cats often overstep their own prints. I once tracked a mountain lion (Felis concolor) in the Klamath Mountains of northwestern California for several weeks. One set of tracks led into and up a muddy slope of a small pond that was drying up. I took plaster casts of several of the prints in the sequence. The casts clearly showed the claws extending for gripping the slippery slope, and that the hind feet were being placed directly in the tracks of the forefeet, overlapping the prints. Some of the casts I took clearly showed five toes in front of the pad, not four because the cat was stepping in its own tracks.

Another large cat that sometimes may overstep its own prints is the tiger (Panthera tigris).

In Panna National Park in central India thorn-scrub woodland, I photographed tracks of a Bengal tiger (Panthera tigris Tigris) that had walked through a muddy wash. The following photo in this sequence clearly shows five toes, but tigers, like all cats, leave imprints of only 4 toes per foot. Clearly, this cat had stepped directly into its own print. 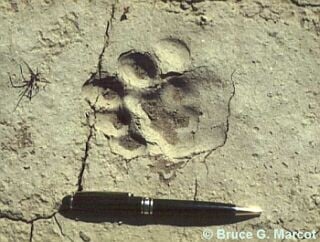