Back to The Plexus Home Page ...

In a recent textbook Wildlife-Habitat Relationships: Concepts and Applications, Second Edition, I discussed a knowledge-based approach to examining the inadequacies of the current taxonomy of garter snakes (Thamnophis spp.) in northwestern California.

In the book, I present the results of applying the meristics -- scale counts and coloration -- and habitat of a sample of garter snakes I caught in the Klamath Mountains, to current taxonomic identification keys. I built an expert identification key to the supposed species and subspecies of the region, using an example-driven rule-base model. I then compared the meristics of captured snakes to the identification model, to test how well the existing taxonomy and keys fit the real world.

I built the identification model by using the program 1st Class (Programs In Motion, which may now be defunct or subsumed under some other company). As I describe in the book,

Running the expert system for each of my 26 field sample observations helped determine the degree to which the key can identify each field specimen. This helped me identify which field specimens represented outliers, potential hybrids, or undescribed forms, and the specimens' characteristics contributing to these findings. The operational expert system allows for answers of uncertainty, from which it then prompts for additional characteristics not covered in the static identification key.

The results suggest that some individual snakes just don't fit the keys. While this is well known for the taxonomically messy garter snake complex, the approach served to [1] demonstrate the utility of a knowledge-base approach to identifying problems of taxonomy, and [2] identify the specimens, their specific characteristics, and the taxon-specific identifications (to species or subspecies) that confounded the standard identification keys and existing taxonomy. This may be an invaluable step in revamping the systematics of this snake complex. It's the first and only example I know of applying this form of modeling to these types of questions.

And here is the expert system GARTER for you to download and to inspect and use on your own. It comes in a PC DOS PKZip file (40KB) called GARTMODL.ZIP, which consists of 3 files. Unzip them to any directory, and run the model by typing GARTER

Since the Analysis Was Done

Northwestern Garter Snake (T. ordinoides) still seems to be a fairly stable species, with no subspecies currently delineated (Brown et al. 1995). I found none in my Klamath Mountains samples.

It is rather heartening that the taxonomic confusion over some of the T. elegans subspecies complex -- as I identified in my little modeling analysis -- may have been in part now "solved" by the introduction of T. atratus in the newer taxonomies.

We also are a few steps ahead in answering my questions about revamping taxonomic designations of this species complies. As I wrote,

But I also posed some difficult questions of conservation, which are yet unanswered, and which may bear further work:

And to learn more about the specifics of this modeling exercise, please consult (= purchase) our textbook!

2 Also recently published has been:

ÝI have not studied this volume. [Thanks to Plexus reader Theresa Ward for the correct citation.]

BACK to The Plexus Home Page ... 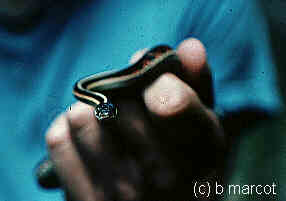