TAKEN FROM PUBLICATIONS SUBMITTED OR IN PREPARATION, BY BRUCE G. MARCOT AND

(note: not included in these extracts are tables, figures, and references; these can be found in the original documents)

Arbelbide, eds. An assessment of ecosystem components in the interior Columbia Basin and portions of the

The overall distribution of most of the large carnivores (secondary predators, or tertiary consumers) has declined

bear, gray wolf, mountain lion, lynx, and wolverine (a mid-size carnivore also considered here). All of these are

large-bodied and have large home ranges.

still contain grizzly bear and gray wolf. Information on distribution and density of wolverine in the assessment area

is lacking, although some studies have been conducted in the Sawtooth Mountains of Idaho. Four areas, the

Yellowstone, North Cascades, Cabinet-Yaak, and Selkirks Grizzly Bear Recovery Areas, each contain all of the six

species but have low numbers of either grizzly bear, wolf, and/or wolverine. Only the Northern Continental Divide

are well distributed and abundant enough to allow studies to investigate the relations among the above species.

Historically, much of the assessment area, especially the forested parts, supported populations of all of these large

with mountain, lions have increased over the past few years, possibly as a result of increased numbers of mountain

lions or of increased human activity in mountain lion habitat. Black bears are also well distributed in the forested

ecosystems within the assessment area. All states continue to offer sport hunting of black bears and most, if not

all, offer permits for mountain lions.

Within suitable vegetation cover types in the assessment area, lynx and wolverine are widely distributed although

their total numbers and local density have been reduced significantly. Within the assessment area, lynx are on the

the southern extension of their range (Koehler and Aubry 1994). Their distribution in the assessment area may have

retracted northward (Koehler and Aubry 1994). The largest concentration of lynx in the contiguous 48 states has

been identified in north-central Washington (Brittell and others 1989). Smaller, isolated populations remain

across northern Washington but in some cases in very low numbers as compared to historic levels. Most of these

individuals are connected to populations and habitats in British Columbia. Lynx are also present in Idaho and

Montana and are still trapped (two permits per year) in Montana. Wolverine is reported over much of the

assessment area, but are found in very low densities except in parts of the Rocky Mountains (Banci 1994).

and protection against trapping, poisoning, and killing during the settlement of the western United States. Although

gray wolves were nearly extirpated from all of the lower 48 states, recolonization of the Northern Rocky Mountains

populations to expand and disperse southward from Canada (Fritts and others 1994). Changes in human attitudes

toward wolves and reintroducing wolves increase the chances of survival of some of the dispersing animals.

Recovery Area is the exception). The North Continental Divide and Yellowstone Recovery Areas have a grizzly bear

scavengers. The Yellowstone Recovery Area may not have populations of gray wolves (reintroduced in 1995) or

lynx of sufficient size to investigate interactions between species. The Cabinet-Yaak Recovery Area may have

sufficient populations, although the grizzly bear population is still being augmented, of all six predators to warrant

studies of their interactions but no such research is currently being conducted.

There are ongoing studies in northern Montana on grizzly bears, gray wolves, and mountain lions. Some

preliminary anecdotal information from these studies relates to how these three species interact. There have been

four reported cases of wolves killing mountain lions but not consuming them. There has been one report of several

wolves pursuing a grizzly bear sow with a cub and possibly killing and consuming the cub. Other reports are of

In previous studies, mountain lions tended to remain with their kill, primarily ungulates, for more than one week

until they eventually completely consumed the animal. In northern Montana, however, mountain lions tend to

abandon their prey following the kill and a single meal. Such observations suggest that other scavengers, such as

magpies and ravens have a continuous source of carrion when such carnivores are present (see footnote 19).

eliminated and took advantage of prey sources. With the recovery of wolves and their occupation of low elevation

Paquet (1992) indicated that where prey resources are not limiting, that is where healthy populations of deer,

moose and elk are present, little competition for food occurs among large carnivores. Paquet (1992) found that

where coyotes and wolves occupied the same area, and elk, white-tailed deer, and moose were present, coyotes

tended to prey primarily on deer and occasionally on young elk, and wolves selected elk and white-tailed deer and,

coyotes, but did not search them out. Similar differences in prey preference have been noted in northern Montana

where mountain lions prey more on elk, wolves on deer, and grizzly bears on moose calves. Wolverines are

primarily scavengers (Banci 1994) and benefit from ungulate kill made by other predators. Recent (1995)

Large carnivores can also influence their environment in other ways. Grizzly bear digs in alpine meadows

in digs as compared to similar areas with no recent digs. Some plants, especially glacial lily, are more robust and

settlement by Europeans. Very few studies have evaluated the effects of changes in distribution and abundance of

these large animals on other species or the environment. This change, in turn, has likely influenced the

distribution and abundance of scavenger species of vertebrates throughout the assessment area. It is very little

information that suggests populations of prey, particularly ungulates, have increased as a result of the reduction of

predator abundance and distribution. Many ungulate populations, such as deer and elk, have dramatically

increased since declining of predators, but this is largely a result of habitat enhancement or regulation of hunting.

smaller predators, such as coyotes, raccoons, and skunks which allows those species to increase in distribution and

Ultimately, the distribution and health of large carnivore populations of the assessment area can be thought of as

an index of the status and distribution of wild areas in the Western United States. These species are sensitive

indicators of the degree of human-caused change of wildlands. From a human perspective, they also play critical

press. Macroecology, paleoecology, and ecological integrity of terrestrial species and communities of the

species were mapped and are included in this component (fig. 61). The full set of vertebrate carnivores--and by

inference, the full trophic ladder--once likely ranged throughout the entire basin assessment area, but now is

adjacent lands, and in other locations where grizzly bear and gray wolf recovery areas overlap, as in central Idaho

and north-central Washington. The database and map for this component show number of species by 4th code

The overall map for goal 3, managing for multiple ecological domains and evolutionary timeframes, is shown in

figure 64. HUCs with higher percentage values in this map represent locations with greater occurrences of unique

vertebrate assemblages, and locations with large carnivores (that is, the full trophic ladder). About one-third of the

HUCs ranked moderate (> 20 percent mean condition) for goal 3, and none ranked high. This is not surprising, as

most of the components for this goal do not overlap, by definition of unique geographic assemblages of species.

Locations with moderately scored HUCs include northwestern Montana, the Greater Yellowstone Ecosystem in

western Wyoming, the Cascades Range in north-central Washington, the Columbia River Gorge, and much of the

be found in such "land-locked" geography. 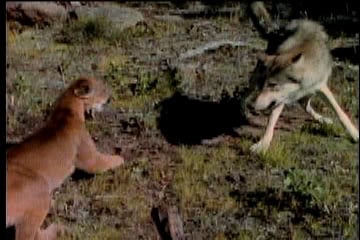