Extracts On Roads And Wildlife

EXTRACTS ON ROADS AND WILDLIFE

TAKEN FROM PUBLICATIONS BY BRUCE G. MARCOT AND COLLEAGUES, INTERIOR

(note: not included in these extracts are tables, figures, and references; these can be found in the original documents)

...A second lichen group, the tumbleweed or vagrant ground lichens, grow, persist, and reproduce without attachment to a substrate (Rosentreter 1993). They are declining because of loss and fragmentation of habitat and herbivory by grazing domestic sheep. Their tumbleweed dispersal habit requires unfragmented habitat conditions. Numerous roads with drainage ditches collect lichens, leaf litter, and deep snow, which leads to conditions that eventually kill the lichens. These conditions combined with widespread habitat conversion to exotic annual grasses have led to the extirpation of vagrant ground lichens from many parts of the assessment area. No sites currently are being managed to provide for the continual existence of these vagrant lichens. In fact, some species still remain unnamed by science.

Bryophytes of dry soil occur on exposed or shaded mineral soil at all elevations. Primary succession on recently disturbed soil includes many common, opportunistic species that rapidly colonize sites, stabilize soil, and enhance invasion by other cryptogams or vascular plants. These are often drought-tolerant, short-lived assemblages that are replaced by others within one or two years. At low elevation in arid areas, bryophytes are a significant component of soil crusts, where they harbor nitrogen-fixing cyanobacteria, stabilize the soil by trapping particles, reduce wind erosion, and enhance water infiltration and seed germination (Anderson and Rushforth 1976, Harper and Marble 1988). In contrast to pioneer associations on disturbed soil, these crusts take many years to form, are long-lived, and suffer long-term damage from fire, livestock trampling, and off-road vehicle traffic (Beymer and Klopatek 1992, Johansen and others 1984). At middle to higher elevations, soil-dwelling bryophytes occur in shaded forests, on root balls of windthrown trees, and exposed soil of trails, roads, and earth slumps.

Several species of tiger beetles (Cicindelidae: Coleoptera) occur as top invertebrate predators in sand dune steppe habitats along the Snake, Salmon, and other rivers of Idaho. The tiger beetles are threatened by recreation (especially off-road vehicle use), grazing and trampling by livestock in a few places, and dune stabilization efforts (including removal of exotic grasses and change of dune vegetation structure). The Idaho State Office of BLM has developed a Habitat Conservation Assessment and Conservation Strategy for these species.

The nest sites of ground-nesting bees may be subject to a variety of disturbances. Land use activities such as grazing, mechanized activities, off-road vehicle use, and subsoiling can damage maturing progeny in the soil and disrupt current nesting activity.

Because they are at the southern portion of their range in the assessment area and have low populations densities, incidental mortality of lynx from trapping, illegal harvest, and road use may adversely affect populations, particularly during population lows.

The development and use of roads is a primary factor that influences the distribution and abundance of most carnivores. Increased access to remote areas results in higher carnivore mortality from hunting, including potential misidentification of species (grizzly bears for black bears, gray wolves for coyotes), and illegal killing (U.S. Department of Interior, Fish and Wildlife Service 1993). Roads also act as significant barriers to movement for some species although the effects of roads on animal movements are not well documented for species other than a gray wolf or in ways that help improve understanding of carnivore population dynamics. Access management of roads in forested, non-forested, and riparian environments is critical to the conservation of carnivores.

As well, roads play a major role in affecting ungulate vulnerability during all seasons of the year, not just during hunting season.

Human-induced mortality is the primary threat to grizzly bear recovery. Management actions or lack of actions that are threats include increasing access with road and trail construction and lack of sanitation management in some recovery areas. Food and garbage associated with residential development on the forest/urban interface developed campgrounds, and other recreational activities can result in bears becoming conditioned to human foods. In many cases, such conflict causes bears to be destroyed. Lack of interchange of bears between populations may also be a long-term threat to many of the populations.

Roads can have direct effects on individual amphibians through mortality, especially during dispersal. Roads can also result in increased sedimentation of aquatic systems which influences both food and reproduction.

...In some of the "desert" areas or sand dunes, off-road vehicle use has become a major threat to reptiles. Roads and off-road vehicles result in direct mortality and indirect losses by fragmenting habitats. Populations of longnose leopard lizards have been affected by roads and road use in parts of their range. Roads fragment some reptile habitats and can become barriers to movements of some species particularly burrowing (fossorial) species such as the longnose leopard lizard, striped whipsnake, and gopher snake (Pituophis catenifer). Gopher snakes migrate seasonally between habitats and are frequently killed on roads. Many species warm themselves on road and are run over. In addition to direct mortality, road construction and mining activities for gravel and other materials for road surfaces can destroy habitats and hibernacula for species such as the western fence lizard (Sceloporus occidentalis) and western rattlesnake (Crotalus viridis).

Mammals and birds (general) and roads:

Fire suppression and intensive forest management have altered much of the forested areas in the assessment area. Associated with this harvest is increased access into areas of previously low human use. These largely inaccessible areas were refuges to some species that are sensitive to human disturbance like the wolverine and grizzly bear. Road construction and travel have resulted in indirect mortality of some species; created barriers for some, especially the wide-ranging carnivores; increased disturbance during critical periods of life cycles; and increased mortality during recreational hunting and trapping.

Roads, especially interstate highways or other multi-laned, high-traffic volume roads may present barriers to several species and might directly cause mortality. At least two gray wolves have been killed by vehicles in the last five years. In some cases, large highway systems are fenced, preventing the movement of some species. Because of fencing, some ungulate wintering ranges are inaccessible to many animals resulting in the animals wintering in areas that do not provide sufficient resources.

Centers of biodiversity and roads:

The centers of concentration of high biodiversity or high occurrences of plants and aquatic species were more dispersed across the assessment area than were the centers of concentration of species rarity and endemism but corresponded well to large blocks of natural areas. This may be because the large natural areas and roadless areas receive fewer human disturbances and are more likely to provide conditions for the full set of naturally occurring species. Two notable exceptions were the large wilderness blocks in central Idaho and the east Cascade in Oregon, which contained few centers of high biodiversity.

For plants and large carnivores, there likely is a correlation between centers of biodiversity and natural areas or roadless areas. 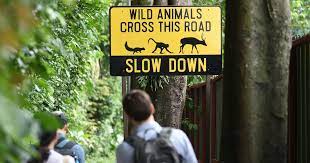