Human And Ecological Communities Of Inner Mongolia, China: A System In Stress

Back to the Ecology Plexus Page

There is a world of immense grasslands, wetlands, and woodlands, that for millennia has supported a hearty people inured to its winter ice, summer heat, and isolation. This is the world of Inner Mongolia.

A part of the People's Republic of China, the natural world of the Inner Mongolia Autonomous Region or Nei Mongol on the Chinese maps, has been suffering immense degradation in recent decades. Here is a brief summary of the relation between the people and their natural environment -- in particular, the influence of human activities on the environment; how recent environmental degradation is causing social, economic, and ecological problems; and some potential solutions, yet to be realized.

In recent times, much of the grazing land of Inner Mongolia -- once fertile with perennial grasses, woodlands, and wetlands – has been greatly overgrazed and overharvested.

What remains today, in many locations, are extremely desertified conditions -- human-caused deserts. The solution to restoring the land, however, is not just one of stabilizing the soil and bringing back native plants.

Also to be considered in any solution are the historic and current conditions of human cultures, land use traditions, and natural and human-caused environmental changes. The ramifications of desertifying portions of Inner Mongolia have touched all of these elements.

In 2002 I traveled to Inner Mongolia and principally to one of its most affected areas, Chifeng League (District), and studied the environmental problems and possible solutions.

What Are the Major Problems?

1. What is the current problem of desertification in Inner Mongolia and Chifeng City?

Inner Mongolia is suffering from loss of soil fertility and productivity due to overuse, and many areas are severely degraded. Loss of soil productivity means human and ecological communities have suffered.

Associated problems include overgrazing, habitat degradation, loss of native wildlife and forests, decrease in native wetlands, sandstorms, human poverty, overpopulation, lack of a diverse economic base, lack of education on the problem and its solutions, and a lack of scientific studies.

The region is ecologically important for its remaining (and vanishing) native wetlands, grasslands, and forests, and because it is the crossroads of 3 major floras (Mongolian Flora, Northern Flora, and Northeastern China Flora).

An increasingly scarce species of pine (Pinus tabulaeformis) is being threatened by massive sand dunes that engulf entire mountain peaks.

2. How are people and wildlife being affected by desertification?

Desertification of the soil has had a major impact on aboriginal Mongolian and Chinese cultures of the region by severely reducing their production of livestock, fodder, and agricultural crops, thus imposing increasingly severe economic hardships on these people.

Significant amounts of topsoil are lost every year when spring and summer winds loft large areas of topsoil into the air.

Such wind erosion causes major dust storms in Beijing and other distant locations.

Much of the native plants and animals of the region has been reduced or eliminated by direct exploitation or by habitat loss, and now occur mostly within the small reserves and parks of the area.

Wildlife adversely affected by this desertification include the mammal's Mongolian gazelle, Ussurian moose, and Siberian roe deer; the bird's white-naped crane, great bustard, reed parrotbill, and relict gull; and many other mammals and birds also closely associated with native grasslands and wetlands of the region.

What was once lush native grassland is now shifting sand.

3. What interest does the government of PRC have in rectifying this problem?

PRC wants to rectify this problem in time for their hosting the Summer Olympics in 2008.

Also important in any conservation program for the region is attending to the tradition of the minority groups of the region, including Mongolian herders. They have occupied the region for thousands of years in a sustainable balance with natural conditions and may have much to teach about long-term ecological protection.

This tourism center is under attack from massive sand dunes created by desertification and overgrazing.

4. What is the recent history of land use and wildlife habitats in Inner Mongolia?

A local Mongolian herder by his traditional yurt hut made of dense wool and hide.

Permanent Mongol settlement on a forest edge. The herders will graze nearby grasslands year-round instead of seasonally when the herders used to be nomadic. PIC 7

5. What is the ancient history of land use and wildlife habitats in Inner Mongolia?

The seldom-seen Great Wall of the Jin Dynasty, built 700-800 years ago to keep out Mongol invaders. Soldiers occupied the towers along the wall, which were spaced at twice the distance an arrow could be accurately shot.

6. What is currently being done to reduce the spread of, and restore, desertified land there?

Deciduous hardwood trees planted in a tight grid in an attempt to help stabilize soil and intercept the wind to reduce wind erosion.

7. What portions of Inner Mongolia still have viable wetland and grasslands for use by wildlife and for grazing? What are they like?

The natural gem of Dalai Nur Lake, with native (frozen) wetlands and grasslands.

8. What lessons can be learned from these areas for the future of ensuring long-term, sustainable use, and restoration of native ecosystems, of the region?

These reserves can serve as benchmarks by which to measure the degree of change that has happened outside their boundaries.

Studying the plants, animals, and ecological processes within these reserves can teach us the limits of productivity of the land, helping land and resource managers to set realistic limits to agricultural, grazing, and other resource uses, for long-term sustainability.

These reserves also teach the value of retaining undisturbed natural areas for human enjoyment, replenishment of the human spirit, and conservation of wildlife, vegetation, and native ecosystems for future generations.

A frozen homestead of Mongolians in the middle of Inner Mongolia

Clearly, the existing natural reserves of the region and adjacent areas have much to teach. PIC 14

Elements of a comprehensive solution also should include the following (as derived from the 11/02 workshop):

Workshop held November 2002 to find a solution to the desertification problem in Chifeng, Inner Mongolia. It was agreed that the answer must span disciplines of ecology, economics, legislation, and education. Much work remains  PIC 15

Back to the Ecology Plexus Page 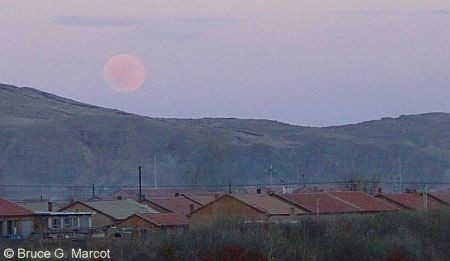