Back to The Knowledge Plexus

An Exploration of Ancient Mayan Archeoastronomy

In the ancient Mayan city of Uxmal (pronounced OOSH-mahl) on Mexico's Yucatan Peninsular rise a number of major structures -- a pyramid, a ball court, courtyards, and numerous other buildings -- which have been shown to have rather striking orientations to cardinal compass directions. However, one structure, the Palace of the Governor, is built off-kilter with the rest of the buildings:

The reason given by archaeoastronomers is that the Palace of the Governor (a misnomer given by early researchers) served in part as an astronomical observatory at least for the planet Venus (along the sight-line arrow "1" in the above figure). In general, Venus was tracked intensely by the Mayans and its celestial movements played key roles in devising their calendar cycles.

In fact, the face of the Palace of the Governor is covered with Venus symbols. Further, standing at the doorway of the Palace, one notices an alignment to the east-southeast of a phallic symbol statue, a double-headed jaguar, and far into the distance a rise on the flat horizon. The line formed by this off-cardinal bearing points right to the winter rise of Venus. Amazingly, the bump on the horizon is another Mayan pyramid in a distant citadel of Nohpat, as shown by the arrow in the following photograph (borrowed from Aveni's 1980 book). Was it engineered to serve as this sight-line? If so, how could the Mayans have surveyed over such vast distances and so accurately?

WHAT DID THEY SEE?

What specifically might have the ancient Mayans seen from this vantage point along this sightline, back in 760-800 C.E. when Uxmal was flourishing?

To test this, I used several astronomical programs to recreate the night sky as seen along that azimuth, for that location and time period. One of the programs, from which I clipped the following images, is Dance of the Planets Ver 2.5 by Science Simulation Software. (Other astronomical programs I used to verify these findings include EZCosmos Astronomy Software ver. 5.0 by Future Trends Software, Inc., Home Planet for Windows Rel. 3.0 by John Walker, and other programs; each gave comparable results.)

Next, I set the latitude-longitude and dates for Uxmal (actually, for nearby Merida) and precessed the equinoxes to correctly represent the sky at that time period. I then determined for the above sight-line from the Palace of the Governor when Venus would be observed most prominently, in closest times to the above equinox and solstice dates. This resulted in the following figure (click on the figure to see the full image):

Note that in this figure the eastern horizon is to the left (the image is sideways, a quirk of the software I used; also, the middle horizon line is the true horizon; the others show potential topographic variation), showing that Venus was just rising a bit south of due east. This figure corresponds to 04:00 on 30 January 796. At this time, Venus rises midway between E and SE, or at about 112.5 degrees azimuth, which is the sighting line azimuth from the Palace of the Governor (the line number "1" in the figure at the top of this page). At this date and time, Venus' apparent magnitude was a very bright -4.1.

This confirms that the sighting line from Palace of the Governor does nearly perfectly intersect the rising point of Venus close to the winter solstice, during the period when Uxmal was flourishing, and when correcting for latitude, longitude, date, and the precession of Earth's axis.

OTHER SIGHTLINES AND A SURPRISING VISITOR!

Other sight-lines for Uxmal have been proposed as radiating to due west from the Pyramid of the Magician over other structures (see Arveni 1980:274). What celestial events might have triggered such interest in interest in this cardinal direction?

The answer may be surprising.

Again, I set the way-back machine this time for 20 June 760 C.E., 20:00. If you were a Mayan chieftain, here is what you would see facing due west from the Pyramid of the Magician in Uxmal:

In this image, the western horizon and due west are on the right side.

What you would see is Halley's Comet! And not just Halley's Comet, but the comet in close conjunction with a crescent moon and brilliant Venus, all appearing close to the summer solstice. And higher in the sky appeared Jupiter on the same sight-line. This would be a show of the century. Now, the Pyramid of the Magician at Uxmal likely was built before this celestial event. But the western sighting line established here to track the setting of Venus at the summer solstice surely garnered far greater interest when Halley appeared, especially as it was in conjunction with the Moon and Venus and in line with Jupiter. It must have been an amazing, supernatural sight.

On this date, Venus appeared especially bright (magnitude -4.5 according to Dance of the Planets, and -5.3 according to EZCosmos). The moon, at 19.14 degrees altitude and 282.50 azimuth (a bit north of true west), was 0.13 full or in a young waxing crescent stage. Jupiter itself was brilliant, at magnitude -2.1 (EZCosmos estimate).

The year 760 was astronomically special at the greater Uxmal/Merida area for yet another reason: a flurry of eclipses, which the Mayans tracked religiously (in both the figurative and true senses).

- A total solar eclipse occurred there on 21 February at 12:58:55 UT (06:58:55 local time) (only the first phase of this eclipse would have been visible before the sunset locally);

In summary, then, it is apparent that key astronomical events observable by, and salient to, the unaided eye, seem to correspond with potential archaeoastronomical orientations of buildings and sight-lines at Uxmal.

Back to The Knowledge Plexus 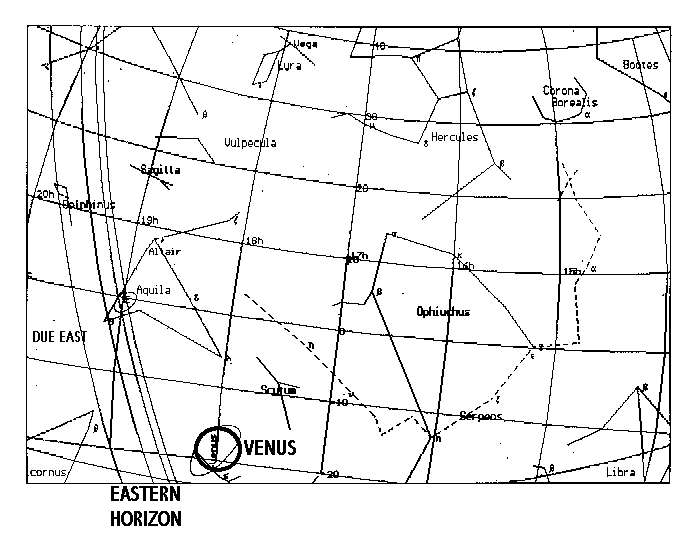