Legends Of The Little People

Legends of the Little People

Throughout the world, many cultures have tales of diminutive spirits in the form of faeries, leprechauns, and other entities. Anthropologically, this is a most interesting phenomenon. (Many cultures also adhere to stories of giants, as well.)

Four stories of little people found in the western hemisphere are those of the devils of the plains Indian tribes, the Stick People of the Yakama Tribe, the Chickcharnies of the Bahamas, and the Menehune of Hawaii.

William Clark, of the Lewis and Clark Expedition, wrote in his journal about the plains devils:

"In a northerly direction from the mouth of this creek, in an immense plain, a high hill is situated, and appears of a conic form, and by the different nations of Indians in this quarter, is supposed to be the residence of devils: that they are in human form with remarkable large heads, and about 18 inches high, that they are very watchful, and are armed with sharp arrows with which they can kill at a great distance. They are said to kill all persons who are so hardy as to attempt to approach the hill. They state that tradition informs them that many Indians have suffered by these little people, and, among others, three Maha men fell a sacrifice to their merciless fury not many years since. So much do the Maha, Sioux, otos, and other neighboring nations, believe this fable, that no consideration is sufficient to induce them to approach the hill."

The Yakama Indians of the east slope of the Cascade Mountains of Washington State have a legend, persisting to this day, of the "Stick People" or little ones that live high in the hills. Some hills are sacred places for the Stick People and should not be trammeled. If they are visited, the Stick People will do you harm. Also, the Stick People do a lot of unprovoked mischief, such as stealing your car keys. [Stories told to me -- during a May 1997 invited visit into the sacred Yakama forest land -- by U.S. Fish and Wildlife Service biologists working closely with the Yakama Indian Nation.]

As noted by Robert Pyle,

A vast body of lore pertains to Ste-ye-hah'mah, also called Stick-shower Man or Stick Man. The Yakama word means a spirit hiding under the cover of the woods. Some say the "stick" refers to this habit, others that these creatures poke sticks into lodges to extract or harass victims, or rain sticks down upon them. In a recent Quinault story, women put out shallow baskets of salmon and other food, and See'atco takes the provender in exchange for firewood, which he places in the basket -- another "stick" connection. Some Indians consider Stick Men to be spirits whose name should not even be mentioned; Don Smith -- Lelooska -- thinks the Stick Men have merely been conflated with Bigfoot.

On Andros Island, Bahamas, is a legend of mischievous, small entities called Chickcharnies. The stories tell of little people that once inhabited the remote forests of the island, that was highly aggressive, and that could turn their heads all the way around. Chickcharnies are reported only from Andros Island and are said to have three fingers, three toes, and red eyes.

Now, there truly once existed on Andros Island -- the largest (104 x 40 miles) and least inhabited of the Bahamas islands -- a Chickcharnie of sorts. It was a 2-foot-tall owl called Tyto pollens, a remote cousin of the smaller Common Barn-owl (Tyto alba). Tyto pollens was a large, flightless owl known therefrom subfossils. It may be that it was territorially aggressive and coexisted with humans. The ability of owls to swivel their heads, and territorial aggression, may have been the basis for this particular legend, but this is speculation.

It is said that to see a Chickcharnie brings lifelong good luck to the observer. I once spent 10 days on Andros Island and explored its seldom-visited old Caribbean pine forests in search of rare birds. But ... no Chickcharnies.

(Andros Island is a wonderful place that time and Club Med forgot ... and may they never find it. The few small hamlets are infused with much local color. Andros even has a "Loch Ness Monster" according to one travel brochure, that described it as a dragon-like sea monster called the Lusca. The Spaniards called the island "La Isla del Espiritu Santo," or the island of the Holy Spirit.)

The Menehune of Kaua'i

On the island of Kaua'i, Hawaiian Islands, is the legend of the Menehune, a fabled (and possibly real, according to Hadley and Valier 1993) race of smaller people. The Menehune may have traveled to the Hawaiian Islands before other Polynesian settlers arrived there.

Hadley and Valier (1993:23-24) go on to describe a Menehune legend in connection with Kalalau Lookout in Koke'e State Park on northwest Kaua'i:

Fearing that intermarriage with Hawaiians threatened the purity of Menehune bloodlines, their king forced his people to leave Kaua'i. Descending these cliffs on a trail down the distant slope..., they hiked on from Kalalau along Na Pali to Ha'ena. You see a line of red dirt where the trail starts. Tragically, two Menehune princesses died along the way near the two valleys now bearing their names, Hanakoa and Hanakapi'ai. At He'ena the surviving Menehune feasted and played before leaving on a double-decker floating island. Sound far-fetched? Perhaps, but consider that the limited Hawaiian vocabulary refers to airplanes as mokulele, literally "jumping islands." After the mass exodus, some Menehune men, not wanting to leave their Hawaiian wives, hid in Wainiha Valley, where a census in the early 1800s recorded 65 Menehune still living here.

As for other legends of little people of the world, who can say? 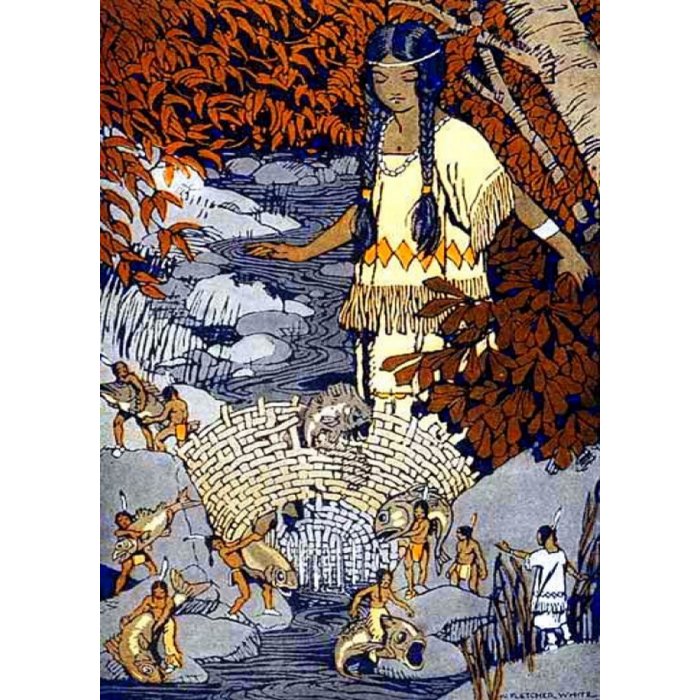