Back to the Sci-Fi Trivia Page

The sequel to the movie 2001: A Space Odyssey was, of course, 2010: The Year We Make Contact. Released in 1984 and featuring now-anachronistic Soviet-American tension as a subplot, this movie nonetheless stands out as one of the best sci-fi movies made.

[1] Two Clarks -- Both 2001 and 2010 were authored (or co-authored) by Arthur C. Clark. In 2010, Clark makes not one but two cameo appearances! The first occurs early in the film. It is of him sitting on a park bench in front of the White House off to the left side of the screen, feeding pigeons, while the two main characters of the scene interact on another bench. Clark is visible mostly, or only, on the wide-screen letterbox version.

[2] What four? -- When the Russian captain is giving one of her countdowns for firing engines, she is speaking in Russian ... and misses one of the numbers! She says very clearly (in Russian), "six ... five ... three ... two ... one ..." Whoops. One of the Americans is giving the English countdown at the same time and does not miss "four."

Sharp-eyed Plexus reader Sean Wallace has pointed out to me that it is actually correct procedure for at least military countdowns in England to not include "four" -- briefly pausing in silence at that count -- because the word "four" sounds too much like "fire." (In non-military countdowns such as used by NASA for space rocket launches, "four" is indeed used.) However, this does not explain why "four" was skipped in Russian ("four" is chitiri in Russian, which does not sound like any Russian word for "fire" or "launch," being stryelyati and zapuskati, respectively).

Not to belabor this point, but in the movie, they do not pause silently at "four" but rather (in Russian) go right from five to three.

I conclude this was still a (very minor) error in the script or performance.

...and as long as I have your attention, here are a few fun facts about the parent film "2001: A Space Odyssey."

The film 2001: A Space Odyssey is one of the very few science fiction movies that correctly depicts conditions in space, in particular:

There is no sound in space.

Vacuum (or near-vacuum) does not transmit sound. The director Stanley Kubrick did it correctly by having the space sequences shown in complete silence (or just with background music) and no sound effects. I can think of no other sci-fi movie that has done this correctly. Watch for this in other sci-fi movies. To me, it is far more other-worldly and eerie to see massive engines firing or explosions (such as the scene in 2001 where the exterior hatch is blown) in complete silence.

Helmets on space suits are not internally lit.

Virtually all other sci-fi -- or any genre -- films have such internal lights shining onto the actors' faces so you can recognize them. This is used in films with space suits, biohazard suits, or any other type of helmet. Once you know to look for this cinematic trick, it looks ridiculous, like the bright lights that illuminate the interiors of cars during night scenes (or like the fact that internal rear-view mirrors are always removed for interior car scenes). Again, Kubrick got it right.

Back to the Sci-Fi Trivia Page 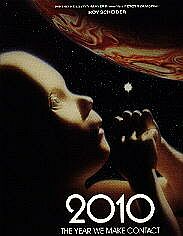