The steam donkey, invented in 1880, greatly increased the efficiency of logging operations in Oregon’s forests. It replaced animal labor, which could not work as fast in rainy and cold weather or on steep terrain. Loggers attached felled trees to a steam donkey by a cable line that pulled the logs as far as a mile. This allowed loggers to target particular tree species and left a large amount of waste in the forests, including uprooted and broken trees. Oregon logging companies first began to use the steam-powered machine in the mid-1880s, but it was not until the early twentieth century that steam donkeys were commonly used to haul logs to waterways, railroads, and mills.

The Coos Bay Lumber Company operated from 1916 until 1956 when it became part of the Georgia-Pacific Corporation. The forests near Coos Bay were a rich source of old-growth hemlock, Douglas fir, cedar, and spruce trees that logging companies began to harvest as early as the 1850s. Early operations removed trees close to the shoreline, but loggers moved farther inland in the early twentieth century. Outside investors and inventions such as the steam donkey combined to make Coos Bay one of the largest exporters of timber on the West Coast.

Donkey Hunt in Sayward BC

[ Merv Johnson offered to take a group on a Donkey Hunt on Sunday, so off we went.

On the way, we stopped for lunch and found this Empire skidder in the parking lot.

The actual object of our hunt was a little harder to locate--then out came the tape measure.

and all the important information was recorded. I hope it gets secured before it falls over. ] 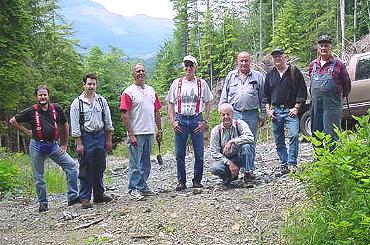