For many years, logging operations were limited to areas close to water where the logs could be floated to mills or to flat ground where animal power could be used. Horses and oxen dragged logs along roads paved with greased wood ties – skid roads. The process was slow and expensive and the animals could not negotiate steep terrain.

John Dolbeer of Eureka, California changed logging forever in 1883 when he patented the first steam-driven spool donkey. These simple, rugged machines were seen for decades in the woods, long after the arrival of more powerful and expensive steam yarders and skidders. The early spool donkey provided no system to return the rigging to the woods for the next log, necessitating a horse or manpower to do the job. The need to reach out further from the machine and solve the haul back problem led to the development of the "Improved" spool donkey about 1900.

On Dolbeer's first model, he wrapped a 150-foot, 4˝ inch manila rope several times around a gypsy head (horizontally mounted spool) and attached the other end to a log. The steam donkey pulled the log toward the engine. The engine was moved in the woods by attaching the line to a tree and pulling itself along on its log skids.

Operating an early Dolbeer donkey required the services of three men, a boy, and a horse. One man, the "choker-setter", attached the line to a log; an engineer or "donkey puncher", tended the steam engine; and a "spool tender" guided the whirring line over the spool with a short stick. The boy called a whistle punk, manned a communicating wire running from the choker setter's position out among the logs to a steam whistle on the donkey engine. When the choker setter had secured the line running from the spool, the whistle punk tugged his whistle wire as a signal to the engineer that the log was ready to be hauled in. As soon as one log was in, or "yarded," it was detached from the line; then the horse hauled the line back from the donkey engine to the waiting choker setter and the next log.

In addition to the men operating the steam donkey a man was needed to chop wood for the boiler fire and, if the donkey was beyond the length of a hose from a stream, then a donkey with water bags was required to lug water from a water source to the machine.

Locally there are two places to see steam donkeys.

First, there are two restored steam donkeys in the Deli building opposite the Skunk Depot. They are on the opposite side of the building from the restaurant. Both belonged to the Union Lumber Company.

Second, about 20 miles from Fort Bragg on Highway 20 at Camp 20 there is a largish stem donkey that used to belong to the Caspar Lumber Company – see picture right:

Associate Member Colin Menzies also made a model of this steam donkey. Photos of his 1:12 scale model were published in Timber Times (see below) – a magazine devoted to logging and modeling logging activities.

In Search of Steam Donkeys” by Merv Johnson

This book traces the development of the machinery that made steam logging possible, dangerous, and sometimes lucrative. It describes the surprisingly creative methods that old-time loggers used. It explains how they modified the machines, and sometimes misused them. The book has funny, and frequently poignant, tales of living and growing up in a logging camp.

The book is the product of a lifetime of experience and of twenty years of active research in the field. It tells stories of the discovery and preservation of the last of these old-time logging machines. It is crammed full of detailed photographs, diagrams, and dimensions of many types of steam logging equipment. If you want to build a model of a steam donkey there are ten plans you can use.

If you are into steam logging equipment this book is a must. 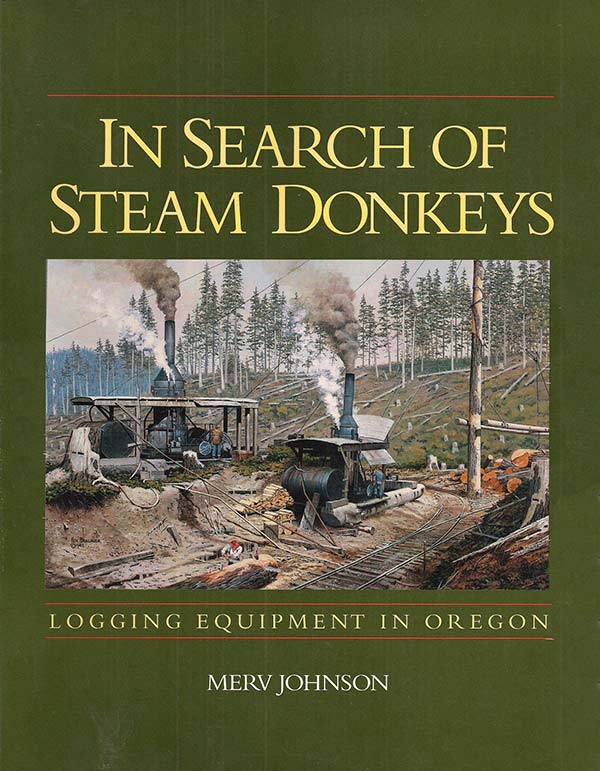