This site started off as a one-stop weather page for my own neurotic checks of the weather and conditions. I've continued to add comments and photos from ski trips in the Cascades (mostly Mt. Hood - my own backyard) and some points further afield - a way to recall past trips and jones for the next one... The Pacific Northwest possesses a lifetime of opportunities, and there are many others with whom I share a passion for backcountry skiing and inspiring views. A quick web search will easily link you to trip reports or resources that either inspired me to go to these places or inspire me to return.

Mount Adams is the second highest peak in Washington and the third highest peak in the Cascade Range. Today Mount Adams provides some of the best and most accessible backcountry skiing in the region.
The combination of a very straightforward, non-technical skin route and over 5,000 feet of possible descent at a consistent 35- to 40- degree pitch make the Southwest Chutes one of most talked about backcountry ski routes on the mountain. On a sunny day, nearly perfect silky corn is achieved. While it gets a lot of hype, this route sees far fewer descents than the South Rib (Suksdorf Ridge), which is also the ascent route for this trip. On a blue-bird day in May, there can be easily 100 people ascending and descending the South Rib route, and you may have Southwest Chutes entirely yourself. This is possibly due to the nature of the return route, which consists of over 2 miles of the traverse over rolling terrain that may at times require repeated de-skiing and re-skiing.
To ascend, follow the South Climb route (Also known as Suksdorf Ridge, or the South Rib) up to the Lunch Counter, and continue from there up to the false peak known as Pikers Peak. The Southwest Chutes descent starts from the south side of Pikers Peak.

The chute descends between a large rocky spur to the south and a prominent gravely ridge to the north. At around 7,800 the chute widens out into a large bowl, bounded to the west by a large moraine. Here the route sweeps more to the south. At around 7,000 the route sweeps around the lower end of the rocky spur to the south. At this point many choose to exit the descent, traversing around the mountain to intersect the south climb route. If it's a killer day, you may choose to take advantage of another 800 feet of descent and continue downhill past the tree line. At around 6,100 feet the descent intersects with the round-the-mountain trail. Be alert, as it is not marked, and in deep snow, it may be completely covered. Follow this trail, staying high if it's covered, for approximately 2 miles until it intersects the South Climb route. 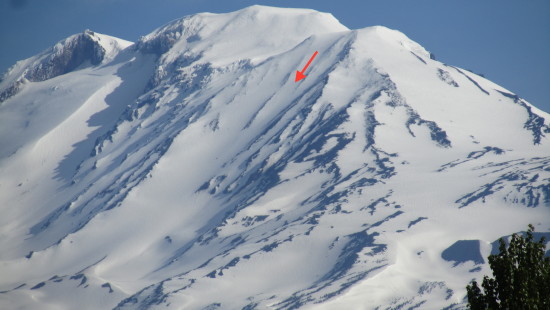