If you’ve been anywhere near Central Oregon, you’ve seen the Three Sisters Mountains dominate the skyline. Each of these volcanoes exceeds 10,000 ft. and are some of the highest peaks in the state of Oregon. Though they are truly considered sister peaks to one another, each has unique climbing routes that require varying physical conditioning and gear.

Note: Some people actually climb all three in one day. Check out this local man who completed the total traverse in 6 hours & 39 minutes.

My post describes a western approach from the Obsidian Trailhead (for a good description of the eastern approach, check out this article on Summitpost). This trailhead is easy to find, right off of the historic Highway 242, just plug it into Google Maps. You need to acquire an Obsidian Limited Entry Area Permit before you go – only 30 hikers/day are allowed on this trail. Call, email, or visit the McKenzie Ranger Station to do so.

Background: I’ve been up this mountain three times now (summiting once) and still don’t know which precise route I’d recommend. It’s all up to personal preference and interpretation. There are camping opportunities available at Glacier Creek and other areas along the PCT, but we chose to complete this in a one-day trip.

You have a couple of options starting out on the Obsidian Trail (#3528).

First option: Take a left after about 3.5 miles at Glacier Way (#4336), which will take you right to the start of an “unmaintained climber’s trail” sign and up the Collier Glacier.

Second option: Take Obsidian Trail all the way to a T-junction at the Pacific Crest Trail.

Go left (north) here to reach the “unmaintained climber’s trail” sign and continue towards the Collier Glacier on your right (our ascent).

Go right (south) here and follow a dry streambed up a colorful, flowered valley towards the Renfrew Glacier on your left (our descent).

Whichever way you go, you’ll be directly facing both North Sister (to your left) and Middle Sister (on your right). Aim for the saddle between the two.

Pro tip: Use your crampons early on. The rock is incredibly difficult to navigate; you’ll save a lot of time by doing as much snow + glacier travel as possible (take it from this guy and this guy).

Some people complete both mountains in one climb, often camping overnight in the saddle between the two, but it should be noted that North Sister’s summit requires difficult class-4 climbing where a rope and helmet are mandatory. Furthermore, North Sister is infamous in Cascade climbing for its rotten and crumbly rock – you should expect plenty of loose rock and rockfall should you attempt this climb.

Once you reach the saddle between North and Middle, continue to your right by scrambling and bouldering over razor-sharp volcanic rock. Once you reach Middle’s ridge, you should find a faint climber’s trail that leads you up the final 800 feet to the summit. Parts of this climb are super sketchy with vertigo-inducing exposure. Like the rest of the climb, it’s easy to get off-trail, so go slowly and think ahead when visually planning your route.

From the top, you have close-up views of South Sister, Broken Top, and Mt. Bachelor to the north, and North Sister, Mt. Jefferson, and Mt. Washington to the south.

After ascending the Collier Glacier (slightly right looking down), we decided to descend via the Renfrew Glacier (directly below Middle Sister’s summit ridge). We wore our crampons down until the snowfield ended, and followed a large natural gully for a few miles until we eventually hit the PCT again. It was tough to find our location, even with a compass and map, but we turned right and in under 2 miles joined up with the Obsidian Trail intersection again. Bear left, and continue 5.5 miles to the trailhead parking lot.

Overall: Incredibly strenuous day, mostly due to boulder-hopping and route-finding, but an awesome and exhilarating undertaking for the truly adventurous.

Distance and elevation gain is approx. depending on the route. 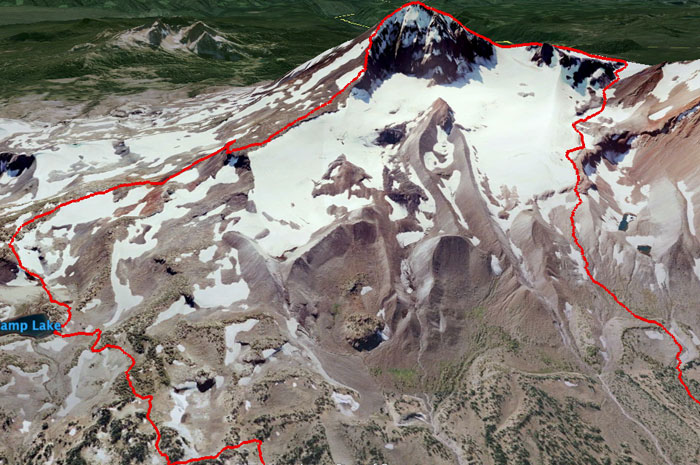