This site started off as a one-stop weather page for my own neurotic checks of the weather and conditions. I've continued to add comments and photos from ski trips in the Cascades (mostly Mt. Hood - my own backyard) and some points further afield - a way to recall past trips and jones for the next one... The Pacific Northwest possesses a lifetime of opportunities, and there are many others with whom I share a passion for backcountry skiing and inspiring views. A quick web search will easily link you to trip reports or resources that either inspired me to go to these places or inspire me to return.

Backcountry wisdom and a wag of the ages. Everything from embarrassing words to forbidden knowledge, to eloquent. Find it here, and you decide what category the quotes fit. Updated frequently, please stop by once in a while and see what’s new. We’ll add the latest at the top.

“Live solidly in your challenge zone”

“The sensual caress of waist deep cold smoke… glory in skiing virgin snow, in being the first to mark the powder with the signature of their run.”

“I want to solve a climbing problem in the mountains, not in the sporting goods store.”

“A surprising characteristic of corn snow is its abrasive quality”

“Had God not driven man from the Garden of Eden, the Sierra Club would have.”

“I understand the only blasphemy — to willingly jeopardize my life, which I have done, and it sickens me…”

“A high mountain ascent is first and foremost a pretext for friendship.”

“I find that agnostics also pray.”

- Greg Child, The Other Side of Luck

“Boyer (a telemarketer) is hard to distinguish from the best alpine skiers.”

“Climb above all with your head. Always measure what your want to do, against what you are capable of doing. Mountaineering is above all a matter of conscience.”

“But how splendid is this intimate dialogue between man and the forces of nature!”

“The mountains are beautiful but they are not worth dying for.”

- Greg Child, The Other Side of Luck

“What is important is the man who is born in the course of the ascent.”

“Real guides cannot be heroes. When somebody gets into trouble in the mountains, we go after him, take the necessary risks, and bring him down. Nothing else counts.”

“Rise early…One seldom regrets having made an early start, but one always regrets having set off too late; first, for reasons of safety, the adage ‘itis later than you think is very true in the mountains, but also because of the strange beauty of the moment.”

-  Gaston Rebuffat, On Snow and Rock

“The surest way to make a monkey of a man is to quote him.”

“Are they from the circus?”

“A goal without a plan is just a wish.”

“If the facts don’t fit the theory, change the facts.”

“Do not follow where the path may lead. Go instead where there is no path and leave a trail.”

“I used to have a wild time with three women until 5 a.m., but I am getting older. In the Olympic Village here, I will live it up with five women, but only until 3 a.m.”

“Your children will ski as well as you do for one day in your life. The next day, they’ll be better.”

“I can accept failure, but I can’t accept not trying.”

“I am not the editor of a newspaper, and shall always try to do right and be good so that God will not make me one.”

“You are one with your skis and nature. This is something that develops not only the body but the soul as well, and it has a deeper meaning for a people than most of us perceive.”

“If you don’t do it this year, you’ll be one year older when you do.”

“…Skiing is the best way in the world to waste time.”

“[Aspen] has been preserved like it’s been sprayed with hairspray and it won’t flow in the wind anymore.”

- Ski film telemark star Steve Leeder begs to differ with those who claim telemarking is as easy as alpine skiing.

“How could I live without powder?”

“When I’m not skiing, I’m usually throwing gainers and spins off the roofs of houses into trees and bushes…my worst injury while skiing occurred last May when I shattered my heel…That was my first big injury since broke my back a few years ago. The lesson I learned was to be careful.”

“Noah’s Ark was built by amateurs, the Titanic by professionals.”

A distant shout was heard during Dick Barrymore ski film production above a hidden cliff before 2-way radios became readily available. From Breaking Even, by Dick Barrymore.

“I don’t even work with clients if I don’t like them.”

He thinks snowmobiles are noisy and stinky but realizes that “some people would say that about me, too.”

- Bob Athey, Wizard of the Wasatch

“Have you ever really hugged a ponderosa?”

“I hope it doesn’t happen again.”

- Seth Morrison, after surviving an avalanche.

“Visitors to Whistler Blackcomb can now venture into the backcountry without leaving the ski area boundary.”

“Telemark gear sales are three times that of randonnee, but randonnee is growing twice as fast.”

“Human power is its own end.”

“I do love my Dynafits…Sometimes at night I wake up in my gear closet heavily petting them as if they were my high school prom date.”

“They just turned on the television, and you’re the entertainment of the day.”

“Giving money and power to the government is like giving car keys and whiskey to teenage boys.”

“I have to say that telemark touring without a free pivot is STUPID.”

“We shall not cease from exploration, and the end of all our exploring will be to arrive where we started and know the place for the first time.”

“He who would travel happily must travel light.”

“There are only three sports: bullfighting, motor racing, and mountaineering; all the rest are merely games.”

“The true sign of intelligence is not knowledge, but imagination”

“The tools are only as good as the carpenter.”

He shattered his glass ere…

Only half the sands had run

yet, he holds the heights…

he holds the heights he won

“A person should have wings to carry them where their dreams go, but sometimes a pair of skis makes a good substitute.”

“[Mountaineering] Ethics are a bit like erections; however well-intentioned they are prone to sudden deflation. 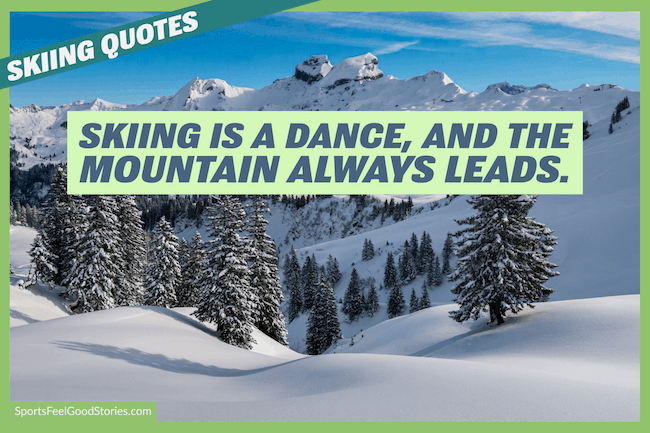