- From the Collection of Bertone S.p.A.

- A futuristic Marcello Gandini design with a unique, prototype engine

- Predecessor to the Espada production car

“A Bertone design so fresh that everything else looks old fashioned,” was Road & Track’s opening comment in its July 1967 report on the stunning Lamborghini Marzal show car. Introduced at the Geneva Motor Show four months earlier, the P200 Marzal was the result of a close collaboration between Bertone and Lamborghini. In fact, it was the materialization of a common ambition shared by Nuccio Bertone and Ferruccio Lamborghini: to give birth to a true GT with comfortable seating for four, offering high performance and redefining the very concept of grand touring.

Suitably named after a strain of fighting bull, the Marzal featured a unique prototype engine developed by Lamborghini that would never see production. It was a transversally mounted in-line six-cylinder which was essentially a rear bank of a Miura’s 3,929-cc V-12, fed by horizontal Weber carburetors and mated to the standard five-speed transmission. The engine was turned 180 degrees compared to the Miura’s layout so that it was behind the rear axle, therefore making it more of a rear- than mid-engined layout. This obviously freed up interior space so that four passengers could sit comfortably. The radiator was fitted right at the rear, which meant the passengers could take some luggage too, as the long front bonnet housed 11 cubic feet of loading space, along with a 21-gallon fuel tank.

The chassis was based on a much-modified Miura chassis, its wheelbase extended by 120 mm to accommodate those extra two passengers. As the overall length was still relatively compact, Marcello Gandini elected to use a pair of long gullwing doors rather than a constrained four-door layout. This enabled him to fit large windows which, combined with a lightly smoked glass roof, helped create a very airy feeling inside the cabin. Bertone helped engineer the air-conditioning system made mandatory by such a large amount of glass surfacing, which totaled 4.5 square metres (48.4 sq. ft.) and was supplied by a Belgian company, Glaverbel.

Famously, Ferruccio Lamborghini objected to those doors, in particular the lower windows mounted below the waistline which would “offer no privacy: a lady’s legs would be there for all to see.” Supporting the weight of those hefty gullwing doors when open were a pair of long transverse springs at the rear of the engine bay operated by a pulley and shaft system which relied in part on cleverly recycled steering column components. The one-piece rear engine cover was hinged at the bottom rear, and for all the glass employed in the cabin, there was no rear screen, replaced as it was by a panel made of aluminum slats riveted together. The assembly allowed for rear visibility as well as air circulation to help with engine cooling.

The interior was highly futuristic, with a hexagonal honeycomb theme on the dashboard and center console housing most instruments and controls. The hexagon theme was carried over even in the general shape of the seat’s cushions and backrests, whilst their trim literally stood out with a highly reflective finish. This space-age arrangement may even have inspired the great French-American designer Raymond Loewy, whose designs for the Skylab space station, developed from 1967 onwards, would rely heavily on hexagonal patterns.

It must be noted that the interior underwent some variations in the period, presumably both before and after the car’s unveiling, as elements such as the steering wheel, gear knob, instruments, and the trim itself were modified in stages. The configuration of the car as it stands now still dates back to the 1960s.

The Campagnolo magnesium wheels of the Marzal – complete with gorgeous three-eared spinners – were a true masterpiece in themselves, their elaborate, sporting design echoing that of the Miura’s wheels only with added elegance. Even the form of the holes was a continuation of the hexagonal theme seen throughout the interior and on the rear window slats.

The slender nose featured six Marchal quartz-iodine headlamps, likely the smallest available at the time, to fit between the lip of the bonnet and the innovative black rubber bumper. The body was made of steel, with the massive front bonnet crafted in aluminum, presumably to make it more manageable to lift. Styling-wise, the car was full of detail touches that converged to make the shape more dynamic. Note the polished metal sills running the length of the car to make the body appear even slimmer and the perceived proportions even more dramatic. Clever surface sculpting is evident throughout, such as in the way the upper wing’s edge, although interrupted by the large side window, is picked up again above the rear wheel arch, adding just the right amount of volume over the rear wheel and creating a subtle housing for a cleverly-concealed side intake feeding the engine. The lip of the front wheel arch peaked right at the edge of the bonnet, contributing once again to its very slim look. Four years later, Bertone’s chief stylist Marcello Gandini would have the lip overlap on the bonnet altogether for an even more pronounced effect on the Stratos Stradale.

Whereas Gandini’s earlier projects for Bertone (Miura, Montreal, Fiat Dino Coupé) may still have been tinged with some of Giugiaro’s own design flair, the Marzal entirely broke away from that mold and was the car that confirmed Gandini’s position as a star designer in his own right. The softly-spoken man declared: “Basically, the Marzal was drifting towards what science-fiction writers had been promising. With these prototypes, a public declaration was made of our way of seeing the cars of the future.” Certainly, a whole generation of kids fell in love with the Marzal thanks to the models produced in numbers by the likes of Matchbox, Dinky Toys, Politoys, Penny, and others.

The Marzal made a notable appearance at the Monaco Grand Prix on May 7, 1967, where it was driven around the circuit by Prince Rainier together with Princess Grace. Features followed in the international press, topped by a proper test drive by Italian magazine Quattroruote, which noted the engine’s liveliness in its October 1967 issue. Although never fully developed by Lamborghini, the Marzal was estimated to be good for a 225 km/h top speed (140 mph). The respected Automobile Year annual noted that four members of its staff had spent an entire day driving in the car, adding that if it were to spawn a production version, they would have no hesitation in naming it their “Car of the Year.”

The Marzal was indeed followed into production the following year by the Lamborghini Espada four-seater coupé, which retained the Marzal’s general aesthetics but did away with the rear-engine layout and glass doors. The initial Espada pre-series prototypes still sported gullwing doors, but those too had disappeared by the time the final car reached production. That the Espada remained in production until 1978 is a testament to the Marzal’s novelty. The show car was influential enough to still have an impact on car designers decades later. Bertone itself adapted the concept with its 1994 Karisma concept, which replicated the rear-engine layout and long gullwing doors giving access to a plush interior seating four, this time on Porsche mechanicals.

The future owner of the Marzal will not only possess a landmark example of design by Italy’s dominant post-war coachbuilding industry, one the illustrious British journalist LJK Setright described as “perhaps the most extravagant piece of virtuoso styling to have come out of Europe since the war,” but with it a very unique prototype Lamborghini engine, the only one of its type ever made. 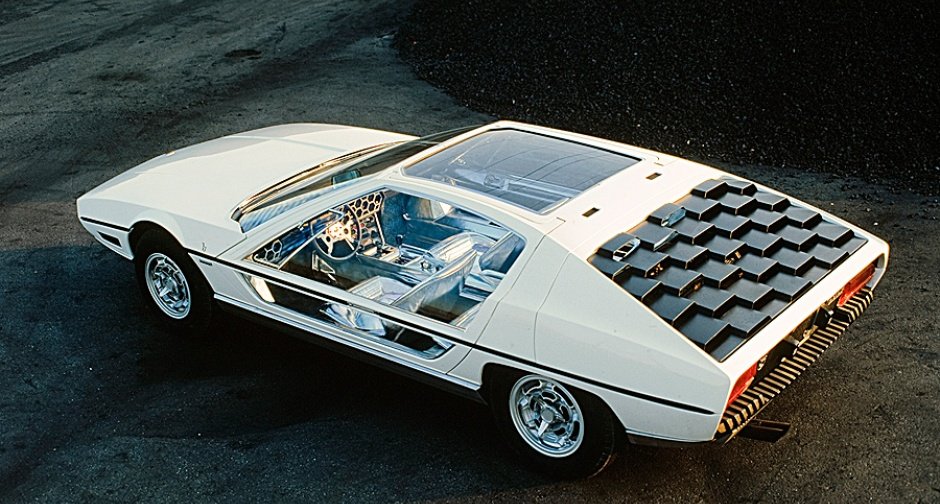