Gothamĺs most famous femme fatale was inspired in part by Hollywood starlet Jean Harlow and, strangely, according to Kaneĺs biography Batman and Me, the artistĺs own cousin Ruth Steel. She was introduced to the gritty streets of Gotham City with the intention of crafting a romantic entanglement for the Bat, one that would pit the billionaire vigilante against a physical and intellectual equal who also happened to be a total fox. It was a relationship that would remain at the core of the Batman mythos until she mysteriously disappeared from comic book pages in 1954. It would be 12 years until Selina returned; though itĺs never been officially stated, itĺs widely believed to be due to the implementation of the Comics Code Authority.

The self-imposed regulations featured many strict rules, including ones that seemed to relate to the flirtatious game the Bat and Cat played: ôIf crime is depicted it shall be as a sordid and unpleasant activityů Criminals shall not be presented so as to be rendered glamorous or to occupy a position that creates the desire for emulationů In every instance, good shall triumph over evil and the criminal punished for his misdeeds.ö As we all know, Batman often let his lady love go free and she certainly glamorized the lifestyle of a master thief. Luckily for fans, sheĺs been a DC Comics stalwart since her return in 1966. That return, of course, ran alongside her first onscreen appearance in the cult Batman TV show from the 1960s, which is where weĺll start our rundown of some of the brilliant women whoĺve brought Catwoman to life over the years.

Julie Newmar was already well versed in unusual roles when she took on the mantle of Catwoman alongside Adam West and Burt Ward in Batman ĺ66, having played a humanoid robot on the strange ĺ60s sitcom My Living Doll only one year before putting on the cat ears and becoming the first-ever on-screen Catwoman. Fitting in with the campy tone of the show, Newmar was an electric villainess who began as nothing more than an antagonist before she started to ramp up the sexual tension between the Cat and the Bat. Though she was never called Selina Kyle, Newmar managed to make the character larger than life, and in the spirit of the show was always surrounded by a colorful assortment of henchmen and thugs.

The tough-talking, sometimes cruel character was pretty radical for the time as she subverted the idea of the usual good girl love interest and was far closer to the noir-soaked femme fatale archetype. Newmar took on the role for the first two seasons of the show, taking a more prominent role in the seriesĺ sophomore outing. Though she had to leave due to a scheduling conflict, she began a trend of brilliant women who would bring Catwoman to the screen, and even returned to voice her in two DC animated movies based on the classic TV series.

Taking the reins from Julie Newmar in the third season of the classic series, Eartha Kitt already had an extensive career as a singer, actress, and activist. The studio was enamored with Kitt instantly as they felt that she already embodied the concept of a cat woman. Kitt channeled Meriwetherĺs more serious tone and added a layer of ruthlessness to it. Earthaĺs Catwoman was a true equal to Batman, one who was never intimidated by the men in tights who wanted nothing more than to thwart her devilish schemes. Sadly, due to Kitt being the first African-American Catwoman and the racism of the time, there was never any romance between this Catwoman and Batman, which though depressing because of the context actually makes Kittĺs portrayal totally unique as she was a truly independent woman in the face of the hero.

Her groundbreaking role paved the way for better representation in superhero programming and film. It also means that far from Kravitz being some kind of outlier she is in fact carrying on a proud tradition of Black women playing Catwoman thatĺs been going on as long as Batman stories have been adapted on screen.

For many of us, Michelle Pfeiffer was the Catwoman of our childhoods. Her turn in Tim Burtonĺs gothic masterpiece Batman Returns was one that not only introduced audiences to one of the best superhero movie costumes of all time but also redefined Selina Kyle for a new generation. Gone was the pretty, charming, and generally rather well-behaved character from the comics; here was Pfeiffer as a mousy receptionist turned misandrist icon. Kyle became a cipher for female rage, her death at the hands of Max Schreck a prescient analog for all the women harmed by powerful men in their places of work.

Selina returned as nothing less than a force of nature, her bondage-inspired costume becoming instantly recognizable and iconic, the tight latex and exaggerated stitches bringing Tim BurtonĹs gothic flair to life. The character was originally meant to be played by Annette Benning who stepped down due to pregnancy, and Blade RunnerĹs Sean Young famously campaigned for the role after an injury stopped her from taking the role of Vicki Vale in Batman ĺ89. Fate prevailed, though, and Pfeiffer took on the role that would become one of her most well-known and whatĺs arguably the defining live-action Catwoman performance.

When Christopher Nolan returned to Gotham one last time he brought a smattering of famous Batman rogues with him including Talia al Ghul, Bane, and Catwoman. Just like the rest of Nolanĺs vision of the Dark Knight, Hathawayĺs Selina was an updated and realistic take on the comic book character that fit into the gritty world heĺd created. Her role as a talented thief was what brought her together with Bruce as she stole the pearls that were once worn by his darling mother Martha. Quick-witted and equally as fast on her feet, The Dark Knight RisesĹ Catwoman was a criminal on the run who was trying to pull off the one final heist that would allow her to leave her past behind.

Hathway brought a sweetness to Catwoman; there was no connection to animals here, no coming back from the dead, and sheĺs never even referred to by her mantle. Instead, Selina Kyle was nothing more than a street smart thief with a heart of gold who happened to have a pair of goggles that flipped up to look like cat ears. Despite the fact that they end with a classic happy ending that ties up the loose ends of the trilogy nicely, Bruce and Selina still have an antagonistic relationship that at one point even sees Selina sell Bruce out. Hathawayĺs Selina was widely seen as one of the best parts of what was the least well-received film from Nolanĺs celebrated trilogy. Over the years there were a bunch of rumors about a possible Hathaway spin-off, but they never materialized. Still, itĺs fun to remember the woman who kicked Bruce Wayne over and stole Marthaĺs notorious pearls.

Others also cast as Catwoman in TV/Film: 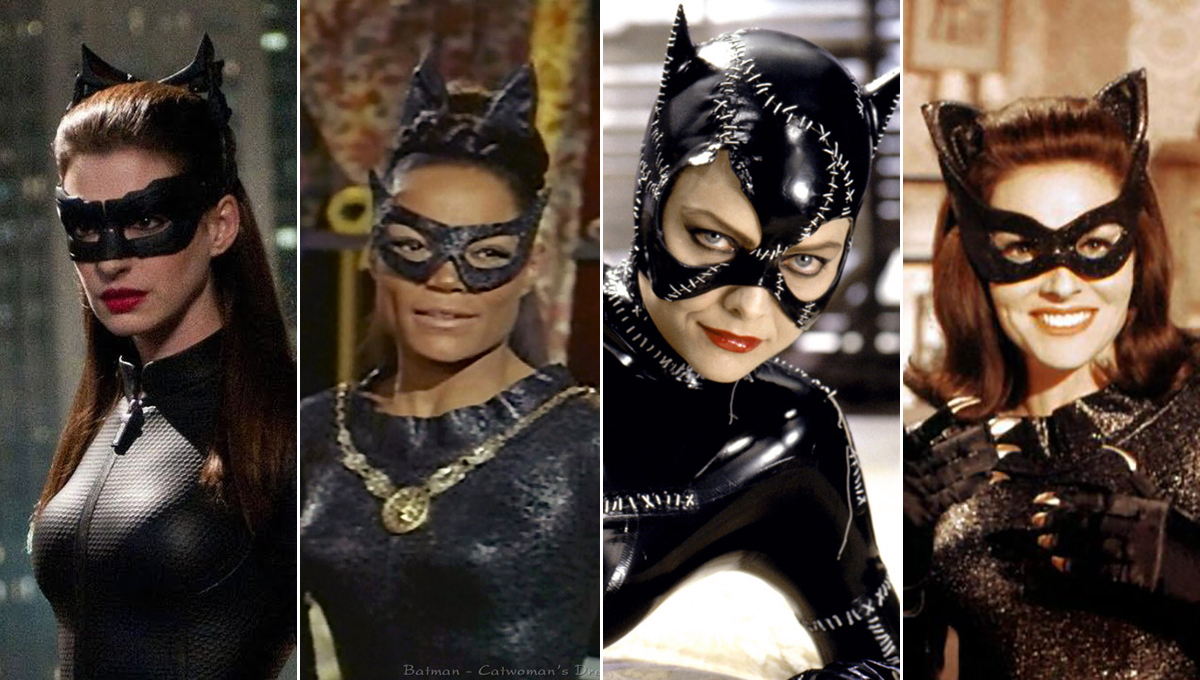