Black Scorpion is a 1995 superhero comedy film directed by Jonathan Winfrey and starring Joan Severance as the eponymous costumed crime-fighter. Roger Corman was the executive producer, and it was originally released on the Showtime cable network as part of the Roger Corman Presents series.

The film concerns the comic book-style adventures of Darcy Walker, a police detective whose secret identity is the Black Scorpion, a superhero vigilante for justice. The Black Scorpion does not have any actual superpowers, but like Batman, she fights evildoers with a combination of martial arts, great agility and strength, and many technological devices, including a high-powered, specially equipped car. Also like the Batman TV series of the 1960s, Black Scorpion is a work of camp, using deliberately exaggerated and unrealistic characters and events to comic effect.

Black Scorpion was turned into a comic-book series, published digitally by Devil's Due Digital. There was also a one-off Legend of Isis / Black Scorpion comic published by Bluewater Productions.

Darcy Walker is a police detective in Angel City, a fictionalized version of Los Angeles. Her secret identity is the Black Scorpion, a comic book-style vigilante. The Black Scorpion does not have any superpowers but, like Batman, she fights for justice using a combination of martial arts and advanced technology, including her high-tech car, the Scorpionmobile. The film's exaggerated characters and unrealistic events are portrayed with a humorous camp aesthetic. 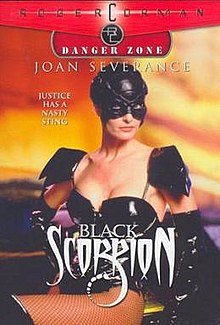