2 years ago, the Law Command was published on the Internet, prompting an overwhelming response from the surrounding areas. In four months, seven new armies formed and joined in the battle -- Flight, Dragons, Death Legion, Supreme Army, Eagle Assault Force, Top Dive, and the Daemons. Each had varying amounts of success, but most grew to almost 200 by the end of that year.

The Super Soaker RPG is totally unlike any computerized RPG simply because your options are quite literally unlimited. Where in the type of RPG one might play on a home entertainment system like a Nintendo or Playstation, where you occasionally choose what to say and can determine how your people act in battle, and other RPGs where perhaps you take turns adding to a story or moving pieces around a board, there is no board, no computer; there are only the players and the gamemaster, and every player can only alter what their single character does -- but they can have their character try to do anything!

The exciting thing about this type of RPG is that you never know what will happen next -- an opponent could ambush you around the next corner, you could be distracted by a plane flying overhead, or an important battle could be interrupted by an earthquake. Also, the game continues even when you fail -- just because you lose one battle doesn't mean that you have to start over, it's just another page in the fictional history surrounding the game.

I invite you to enter a world where the incredible and the ordinary coexist every day, and the future is a blank page ready to be written . . . . . 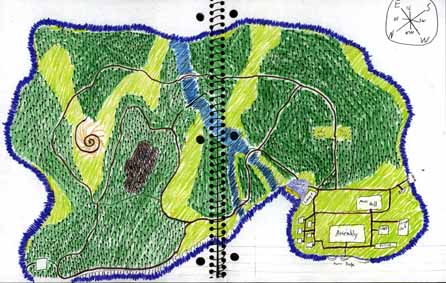