My sweetie was going to be in a dorm in Seattle for six weeks, going to class by day and bleeding onto his keyboard late into the night. I could go there, hover, and be in the way...stay home, hold the fort, and miss him terribly...or get the hell out of Dodge. The choice seemed obvious. (Home is Oregon, by the way.)

My overall plan was to fly to Orlando, rent a car, and start driving north. I would fly home (well, to Seattle) from Albany, New York at the end of July. I had some difficulty convincing rental car agents that six weeks was not an insanely pessimistic over-statement of my needs; it was, rather, the point of the exercise. It became simpler to rent for two shorter periods and not have a car at all during my week in central Baltimore.

Baltimore, for the annual gay square dance convention, was the centerpiece of the trip. I would see tons of good friends there and have a roommate for a while. I was also booked into a place in the Adirondack Mountains for a weekend and had a few relatives expecting me here and there, dates deliberately vague.

This is the photo album of that trip. 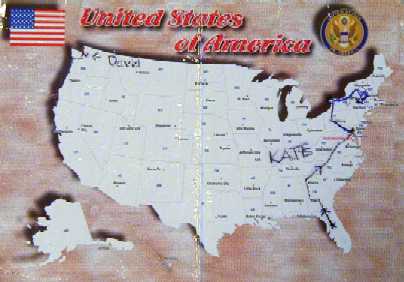