Giorgio Tavaglione is an Italian illustrator and scholar of esoteric studies. In creating the Stairs of Gold Tarot, he was inspired by these words from Dante's Paradiso, "I saw a stair the color of gold, on which shone a ray of Sun, which raised itself so high that my eyes could not see the top...." He sees the tarot cards as the steps of a staircase leading from creation/birth upward to ultimate realization. The cards in this deck are lavish and detailed with ornate borders and figures.

The main arcane of this complex and wonderful Italian work is full of symbolism, with Hebrew, Sanskrit, and heavenly letters in the Latin language with correspondences and the path of the tree of life in each letter.

The minor arcane of the Golden Tarot Stairs is, very clear. Created in 1979.

This tarot deck is very artistic and is also called "the tarot gold stairs." It is complete with an exquisite 80-page instruction booklet, created by Tavaglione using handwritten calligraphy.

Key to reading the cards (see picture below):

1 On Major Arcana 1 through 10 a symbolic representation of the card's number. On the rest of the Major Arcana, a number corresponds to the Hebrew letter.

3 Number of the card

5 Letter of the Celestial Alphabet, or esoteric symbol 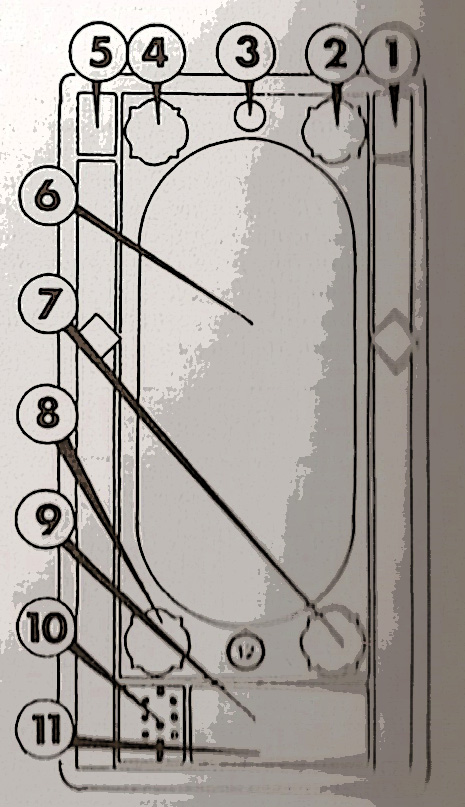