We have now looked at several illustrations linking a subject to its initial letter. Here we find examples of art as an alphabetic letterform. In several cases, not only does the designer form letters from the figures themselves, but his figures also make their own linguistic allusions.

Often, figurative letters were mere decoration, with no linguistic allusions at all. Such instances sometimes took so many artistic liberties that their letterforms are barely recognizable, as we can see with several examples on this page.

His letter “D” (shown above) depicts Diligenza or Diligence, showing a man bracing his feet against a pillar and trying to topple it toward himself; above this is a Delfino digrignamento, or dolphin baring his teeth. His letter “F” (shown above) is Fortuna or Fortune, a maiden whose hands and basket of fruit form the shape of the letter; above her is a smaller image of a fenice or phoenix.
The example above shows a figurative letter “I”, and depicts a scribe demonstrating the art of illustro or illustration to his students. The image is nearly unrecognizable as a letterform. This manuscript includes 27 illuminated initial letters incorporating animals, portraits, heraldic devices, Biblical scenes, and allegorical figures. Giovannino de Grassi was a part of this elaborate work, as were several other collaborators.

Continue to Art as Letterform (Part 2)

alphabetic letterforms within the trumps 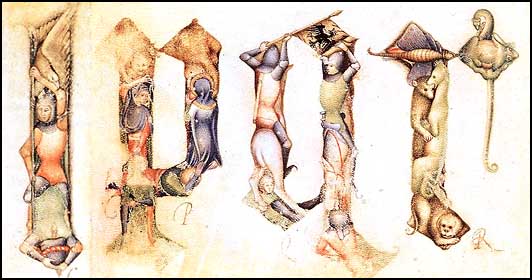