The four rivers are the Pishon, Gihon, Tigris, and Euphrates, which flow from a single source from out of Paradise (Hebrew: PRDS, meaning garden); see Genesis 2:10-14. Each of these rivers was iconographically represented by its own figure, figures identical to the way in which contemporaneous images of Aquarius were depicted: a young male, semi-nude or draped, pouring water from a single vessel. The river figures therefore offer a precedent to Marseilles Trump XVII which are as likely an allusion as is the Aquarius figure. But the river figures may have more to recommend them.

First, the rivers Pishon (PYShVN) and Euphrates (PRTh) both begin with the same letter in the Hebrew language. This could explain the innovation of the Marseilles figure to be (in part) a creative conflation of iconography based upon a linguistic happenstance: the pouring out of Euphrates, and the pouring out of Pishon. This would also be in keeping with a scheme in which disparate elements of a design all allude to a particular Hebrew letter--in this case, the seventeenth letter peh.

Second, the Marseilles design exhibits details which collectively suggest it to be an allusion to Paradise. These details include the pouring out from urns, the two trees and the bird, and what I posit is a stellar configuration which occurs in the east ("And the Lord God planted a garden in the east," Genesis 2:8). While I hope to address these details in a later post, I contend that the design is largely a reference to 'Paradise' and that this lends greater weight to the Marseilles figure being an allusion to the Edenic rivers.

Of course, there are other important details which need to be addressed too, such as the notable alteration of the Pishon/Euphrates/Aquarius precedent into a naked woman, and the identity of the stellar configuration.The Minchiate deck differs from other tarot decks in several features. The first and most obvious difference is that the trumps have almost doubled in number; there are 40 trumps in the Minchiate, in addition to the unnumbered card the Madman, The Fool, or the excuse. Minchiate uses additive Roman numerals for its trumps. Due to a large number of trumps, players generally called them by their number with the exception of the arie. 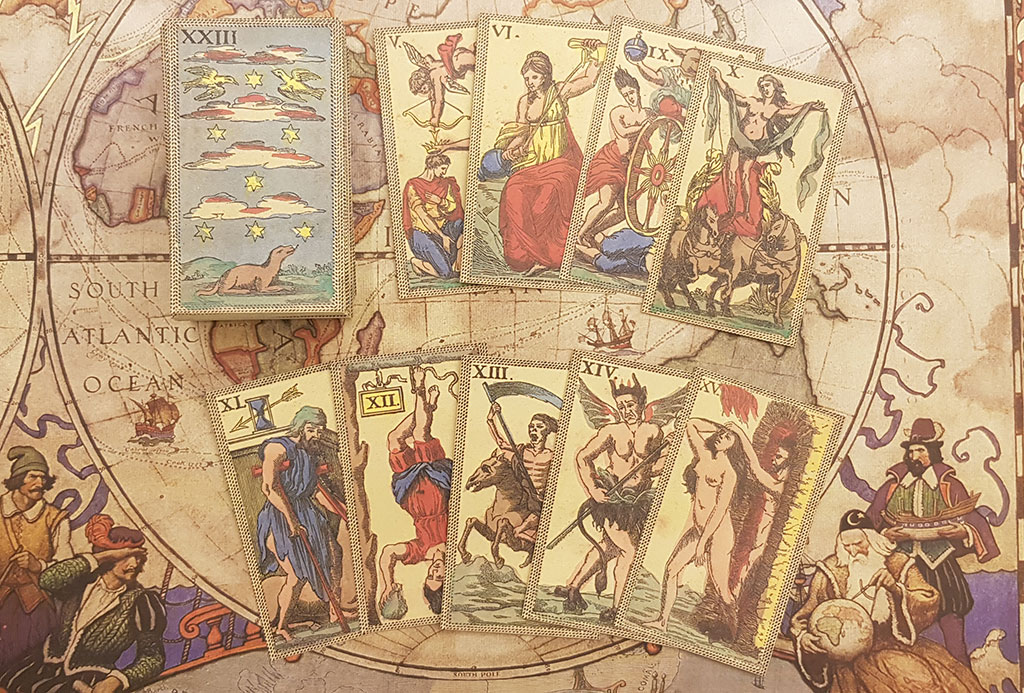