a bibliography of early sources

To help determine any influence the Hebrew lexicon may have had upon the Marseilles pattern, we must examine lexicography contemporaneous to that pattern. The following lists identify some of the relevant Hebrew sources spanning the 10th through 17th centuries.

Bibliographies identify some of the sources by which such works can be identified. The list of Lexicons and dictionaries identifies the relevant sources themselves. When known, each work’s location/date of origin appears in parenthesis. It should also be noted that the majority of lexical works below represent not one but multiple instances of that work, since these manuscripts were copied for circulation.

The Makers of Hebrew Books in Italy (London, 1962), a history and catalog of the first two centuries of Hebrew printing in Italy. Unlike the other sources listed here, Amram’s work excludes the subject of manuscripts pre-dating the printing press.

Bibliotheca Magna Rabbinica (Rome, 1675-93), a four-volume work considered a landmark of the Hebrew bibliography. Written in Latin, it has not currently been translated into English.

Siftei Yeshenim (1680), one of the pioneering works of the Hebrew bibliography.

Bibliotheca Latina Hebraica (Rome, 1694), a catalog describing the hundreds of Hebrew works in his personal collection.

Or Mayer (New York, 1896), a catalog of antique and rare Hebraica, many of which are now housed at the Jewish Theological Seminary.

Bibliotheca Hebraea (Hamburg 1715-33), a four-volume bibliography incorporating previous research, sources at the Oppenheim collection, and works from his own extensive library. Written in Latin, there is currently no English translation.

Hebrew Dictionary (the Levant, early 1500s) did not extend beyond the letter nun.

Also of note is Badirasi’s Prayer for Day of Atonement (the 1200s), every word of which contains the Hebrew letter lamed.

Sharsherot Kesef (France, mid-1300s), a Hebrew dictionary, manuscript copies of which exist at the Angelica at Rome, the Oratoire, the Escurial, and the Oppenheimer.

Dictionary of the Sacred Tongue (11th-century), a popular Hebrew lexicon. Chayug was a renowned grammarian; Ibn Ezra called him “the Prince of Grammarians” and Kimchi says that “he enlightened all his successors.” Manuscript copies are housed in various European collections.

De Lara was a lexicographer, translator, and expert on classical literature. His Keter Kehunnah, on which he worked for 40 years, is a Talmudic dictionary of words that do not appear in the earlier Arukh of Nathan Yechiel. The work extends only to the letter yod.

Sepher ha-Shorashim (Spain, 11th-century), a dictionary of the Hebrew language, of which there were multiple manuscript copies.

Sepher ha-Rikma (Spain, 11th-century), a grammar of the Hebrew language.

Safa Berurah (Italy, the 1600s), a dictionary of the Hebrew, German, Latin and Italian languages.

Various lexicographical works (Cordoba, 10th century). Although they were written in Arabic, most of his writings dealt with Hebrew grammar. Hayyuj defined the Hebrew triliteral (three-letter) root system, providing the foundation of Hebrew grammatical studies.

Sefer Michlol (France, 12th–13th centuries), a longer and more involved Hebrew grammar than that of his brother Moses.

Sefer ha-Shorashim, a renowned and much-circulated Hebrew dictionary. De Rossi calls it “the best and most complete of which the Jewish nation can boast, whence the ablest of our lexicographers have borrowed, and which has opened new sources for the explanation of words.”

Keter Kehunah (Hamburg, 1667), a Talmudical and Rabbinical dictionary that extends only to the letter yod.

Sefer ha-Harkavah (Venice, the early 1500s), which examines the grammar of every foreign and irregular word in the Bible, is listed in alphabetical order.

Meturgaman (Venice, the early 1500s), a Chaldaic and Rabbinical dictionary.

Tishbi (Venice, the early 1500s), a lexicon that defines 712 Aramaic and foreign words used by the Rabbins, and which are unexplained by previous lexicographers.

Levita was a Hebrew philologist, grammarian, and lexicographer, renowned among Christian Hebraists of the sixteenth century.

Gelut Yehudah (Venice, 1612), a Hebrew-Italian dictionary. Modena was the Chief Rabbi of Venice.

Machberet (mid-12th-century), a complete lexicon of the Hebrew language, compiled from the works of Chayug, Jonah ben Gannach, Solomon Gabirol, and the compiler’s own notes. Parchon, born in Calatayud, was a renowned grammarian and a student of Ibn Ezra’s.

Zichron Todat Mosheh (the mid-1500s), an alphabetical index of the Talmud.

Mahberet (10th century), also known as Leshon Limudim, was a Hebrew dictionary that included word roots. Saruk, a Jewish lexicographer and poet, was the first to compose a Hebrew-language dictionary; earlier biblical dictionaries were written in Arabic and translated into Hebrew. The Mahberet was an instant classic, and manuscript copies of it were soon distributed among European Jewish and Christian circles.

Aruk (Rome, 11th-century), a monumental dictionary of Talmudic and Midrashic terms, serving as the basis for many later mystical speculations. It included etymologies as well as foreign words from the Aramaic, Latin, Greek, and Arabic languages.

sources contemporaneous to the early Tarot 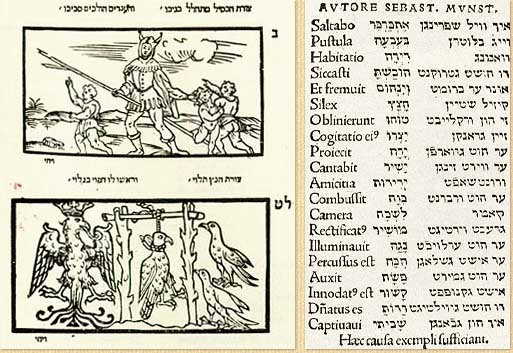