This Japanese deck/book set is available from the same people who distribute the Miracle Tarot Deck. It is a 78 card deck. The Major Arcana have the traditional names. The Major Arcana, the court cards, and Aces are all rendered in a lot of detail. The two through ten of each suit are pips and rather simple ones at that. They depict the requisite number of small suit symbols in a pleasing arrangement that leaves a lot of white space. The Major Arcana have the card number on the top border and the card name on the bottom border. The card name is on the top border upside down and on the bottom border of the Minor Arcana. The cards are slightly smaller than average. The cards are very glossy and the backs are reversible.

The art is excellent. It appears to be pen and ink line drawings colored with ink. Bold, primary colors and black predominate. There is a lot of movement in the scenes and the deck has an exciting, slightly frightening look. The style places it in the category of art deck. There is little regard for the traditional depictions of Major Arcana. Many of the Japanese decks I own seem to be designed to appeal to young girls. This deck seems much more adult. There is some nudity and many of the characters depicted look just a bit dangerous. Many of the cards have a large central character whose clothing or surroundings are rendered in tiny details. The eye does not know where to focus first and subsequent looks reveal details missed at first glance. The cards seem to take place in a fantasy world.

The book that comes with the deck is in Japanese and seems to provide a description for each card and several spreads ranging from four and five-card spreads to the Celtic Cross, to a pyramid spread that uses all 78 cards.

This deck is recommended for collectors, very popular in native Japan. 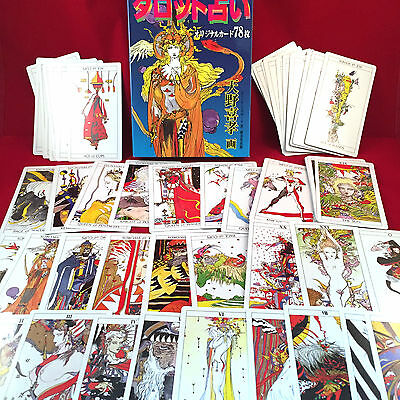