This 80-card deck features the illustrations of the Italian artist Maurizio Bonora and was published in 1996 in a limited edition of 500 copies by Tosi. The name of this deck actually comes from the poet Matteo Boiardo whose writings on the Triumphs, at the end of the Middle Ages, inspired this deck. There is very little history or background that comes with the deck, and the little that there is was written completely in Italian. There is no booklet but there is, on one of the extra cards, some enticing information that I’ve translated:

“In the year 1465, for the grand court under the regency of Duke Borso, the poet Matteo Maria Boiardo, Count of Scandiano, composed two sonnets and seventy-eight three-line stanzas for a new game of Triumphs set to the description of human passions. After approximately three decades, pier Antonio Viti from Urbino, upon request of one lady from the Urbanite Court, made sketches for many of the eighty cards. In the course of the five centuries since, there have been no known paintings made illustrating those unique writings. And so it is that the creative painter Maurizio Bonora agreed, for the first time, to see to completion the work of Boiardo. Such a job seeks to be an artistic contribution to the study of the relationships between the painting and poetic humanities of the Renaissance courts. These first prints in white and black reproduce the look of pen on paper, while work is prepared for tempera on wood. Five hundred copies have been pulled for Tosi publishers.”

The illustrations are actually printed using brown ink, and nicely reproduce detailed line work by Bonora in the style of metal etchings. One of my criticisms about the deck, though, is that the stanzas that appear on every card are difficult to read because the fonts are small, thin-lined, and printed a bit on the light side. Though the text is in Italian I would still wish the text more legible to help my amateur translations of the stanzas that the cards are based on.

This deck is certainly interesting from a historical perspective. The artwork is of course a modern rendering but is reminiscent of the finest work created during the period of the original stanzas, especially the work of Albrecht Durer. The card subjects remind me of the Mantegna prints, but it is interesting to note that these 78 stanzas likely predate the Mantegna prints by a few years. Like the Mantegna series and other variant constructs of the early Renaissance, they show human and divine archetypes that don’t match directly with the major cards we know today. But like the Visconti and the Marseilles decks which came later, they show a 78-card structure with 22 Triumphs, 16 courts or human archetypes, and 40 minor stations. The cards shown in the top row below are all Triumphs. The first card is XVIII Experience, showing a baby at the foot of the amount, with a path winding up and around to the summit. In the background, there are people interacting with each other at various points along the path. Card VIII, Patience, shows a young woman and a small horse with wings on its hind legs. Card VI is Grace, depicted by three maidens and a swan. Trump XX is Oblivion, a heavily-robed old man or woman with a cane, and an animal on a leash that looks like a weasel.

The 79th and 80th cards are placed one at the top of the deck and one at the bottom, and each of them contains one sonnet referred to in the translation above. They were far more difficult for me to make sense of, probably because they use a 500-year-old dialect. But what is clear is that the suits of the minor cards are Love, represented by arrows; Hope, represented by chalices; Jealousy symbolized by eyes; Fear represented by what appear to

be batons with tassels hanging from them. Each suite also has four court-style cards. These 16 cards are interesting in that they each depict a famous person in literature or history. The first card shown in the bottom row, for example, shows Jason from the Greek tale of the Argonauts. Boiardo used him to illustrate this court card from the suit of Hope. Other figures illustrated in the court cards are Jove and Juno, Vulcan, Cyclops from Homer’s Iliad, the boy Paris, Ptolemy, Dionysius, and Andromeda.

as they should have been. There are small burrs on the edges of almost every card, similar to what happens when you manually pull apart thick paper that has been perforated by a stamped die-cut. They are small, and randomly spaced far apart, so they are not as distracting to the eye as they are to the touch.

There are several features that make this deck notable, the greatest being the detailed illustrations by Boiardo. But aside from collectors of decks with historical interest, I wouldn't recommend it for most people primarily since it does not follow a Trump system that is recognizable to us today. 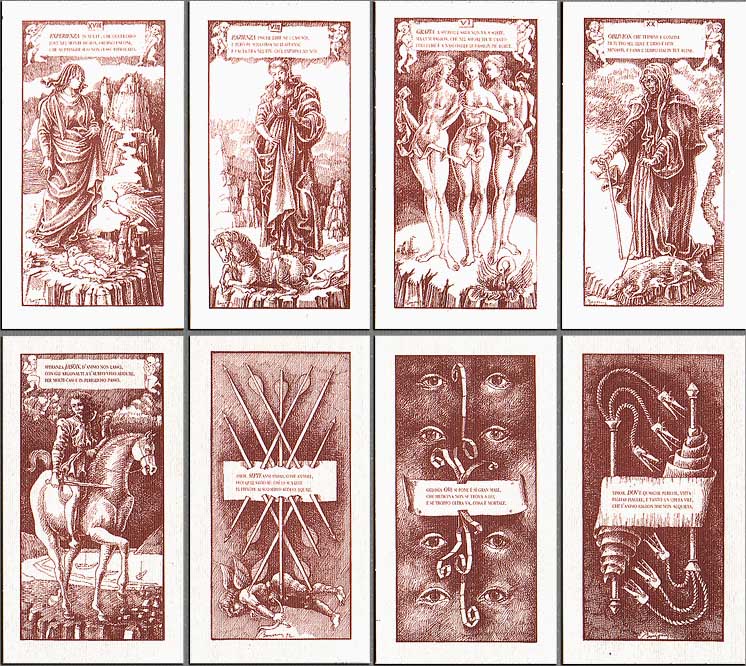