The title translates as 'Dante and the Believers of Love Tarot.'

Inspired by Dante, the fourteenth-century creator of The Inferno, this deck uses Rider-Waite-Smith imagery while carrying new life to the actual cards. With fine art suggestive of the late medieval times mixed with contemporary reasonableness, this deck is a brilliant choice for tarot collectors who are searching for a deck with its interesting energy. Borderless edges and splendid shadings make this a genuine fortune that mirrors Dante's experiences into the human journey to be with the heavenly.

A brilliant tarot deck by Italian craftsman Wolfgang Poggi, its Minor Arcana outlines scenes from Dante's works. Distributed in 1983 by USG, it's no longer available and a collector's item. A portion of the images is sketchy, even for Tarot use.

The cards are large, presumably like the Visconti Sforza. It has gold and silver accents and the deck is overlaid-edged.

A portion of the pictures can be upsetting, but they are so wonderfully made. Exquisite deck.

Lively tones with the gold ink; a brilliant duplicate of an amazingly hard-to-find tarot deck.  These paintings by Wolfgang Peretti Poggi, based on the literary work of the Florentine poet Dante Alighieri (1265-1321), are in the style of Giotto, a contemporary of Dante, and are made to appear in the style of frescos. Areas are printed in gold and silver inks. There are scenes here from a variety of Dante's works, most notably The Divine Comedy, as well as scenes from the Old and New Testaments and from Greek mythology.

The title 'Dante and the Believers of Love' refers to a confraternity of poets to which Dante belonged, whose literature was critical of the Catholic Church. 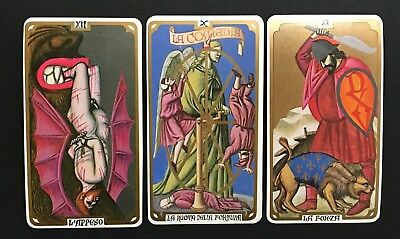