This is an 86-card deck conceived by Gerald and Betty Schueler and painted by Sallie Ann Glassman. It was published in 1989 by Llewellyn and has become scarce in recent years. It is based on the system called Enochian Magic, developed in the 16th century by Dr. John Dee with the help of his magical partner Edward Kelly. This deck’s little booklet gives a nice, basic introduction to their system, though it is very meager in its interpretations of the cards themselves. To fully take advantage of this deck, additional sources of information on the Enochian system would have to be consulted. One excellent starting point would be The Enochian Tarot, written by the deck’s designers as a companion to the cards.

The term Enochian was the name given by Dee and Kelly to the ancient angelic language they claimed to have discovered. Through scrying and astral projection, they documented the details not only of this language of 21 letters but also of the elaborate structure of Regions and Beings which comprise the spaces between Earth and the highest Heaven. Included in this system of magic are techniques for navigating these regions, and the true names of the Beings that reside there. This system closely resembles, with a few significant variations, the Kabbalistic system of Sephiroth and Pathways. The founders of the Order of the Golden Dawn, in fact, found this system so compelling that they incorporated it into their own elaborate system of magical rituals.

In spite of the particularized theme of the deck, I was surprised at first to find some familiar images I could recognize as Trumps. The further I delved into this deck’s arrangement, however, the more I became aware of the idiosyncratic system behind it. This deck is not, in fact, a Tarot deck in the strictest sense. But I personally feel that its designers have assembled the material together so cohesively, and with such strong parallels to the traditional deck, that it does warrant using the word ‘Tarot’ in the title.

One unusual feature of this deck is its numbering system. The cards are numbered from 1 to 86 and contain 30 Trump cards, which are the Aethyrs or Powers, followed by the 56 Minor Arcana which represent the hierarchy of deities or forces found within the Watchtowers. The Enochian Watchtowers, which closely correspond to the four suits of the Tarot, are the fourfold regions of the Elemental Planes. From ‘Ace’ to ‘King’, the stations of beings represented in the Enochian suits are Demons, Lesser Angels, Ruling Angels, Archangels, Kerubic Angels, Lower Sephirothic Cross Angels, Higher Sephirothic Cross Angels, Sixth Seniors to First Seniors, and Kings.

Most of the standard Trump archetypes are a part of this deck, though some of their images and several of the titles stray from tradition. The addition of 8 new Trumps was needed to complete the correspondences with the 30 Aethyrs. One result of this is that the sequence of the Trumps is completely new. With 86 sequentially numbered cards in this deck, I found it helpful to remember that the Trumps are indeed cards numbered 1 through 30.

The paintings on these cards are beautifully painted by Glassman, who the box says is a member of the OTO. Her artwork is extremely professional, the kind of work I would expect to see hanging in a Gallery. I would also stress that the style of these paintings appears highly appropriate to the intended purpose of these cards as glyphs for scrying, projection, and for inspiring a magical state of mind - similar, in this sense, to the Crowley deck or the Tarot of the Spirit. I say this because the images feel evocative of various moods or mental states. They are not filled with detailed symbology but rely instead on simple compositions of organic shapes, and a strong sense of color composition. The color palette that Glassman uses is a true blend of rich, saturated hues and muted earth tones, which is nice to see in images intended for prolonged viewing. In my opinion, very sophisticated artwork.

The 334-page book written separately by the deck’s designers is well done. It covers an overview of the Enochian system, several levels of interpretations into the concepts behind the images, and interesting suggestions on using the cards, including magical and divinatory uses. One of the most interesting sections to me was a chapter on Enochian Gematria. At the top of each card is the name of an Enochian force. These can be seen as magical formulas, where each letter stands for one value in an equation. Using the 21 letters of the Enochian alphabet, the authors have created a chart that shows the correspondences between these letters, their numerical value, and the traditional Tarot trump associated with that letter. In this way, the magical names on the cards give many additional layers of meaning to these wonderful images. 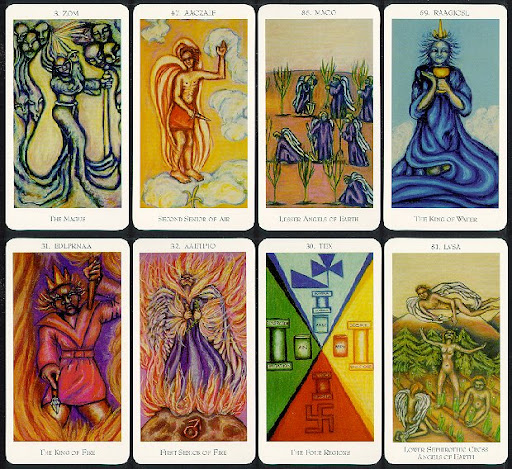