The illustrations are richly illustrated with magically eccentric animals from the fantasy of artist J.J. Grandville takes on a new life in this gloriously capricious tarot.

An exceptionally beautiful tarot, this is a completely illustrated, full-color work of 78 cards that offers an extravagant human and animal mold that defies our sense of fun, fantasy, and fortune.

A bird dreams of his long-lost love. A family of bees gathers to enjoy bread and honey. Two cats, dressed in evening suits, dance on a roof beneath a full moon.

The much-loved illustrations of the animal fantasy of the artist J.J. Grandville take on a new life in this glorious and singularly beautiful tarot, completely illustrated, in full color, the 78 cards feature a magical mold of anthropomorphic figures.

Altogether, a tarot deck that is not only beautiful but has its own perversely fun style.

Karen Mahony founded the slime studio with Alex Ukolov in 2002. His work has since appeared in numerous Design Magazines and New Age publications in the United States and Europe. He has also published many articles on tarot and design, with a reputation as one of today's most accessible and enjoyable tarot writers. Irish by origin lives in Prague.

Alex Ukolov is an artist and designer specializing in traditional Russian styles and techniques. With two degrees in Art and Design, he has also taught miniature decorative painting. Originally from Crimea, he currently lives in Prague, where he runs the slime studio with Karen Mahony.

Sophie Nussle is a former humanitarian worker and has been gathering and taking her stories and tarot letters from the UK and Switzerland to Congo, Rwanda, Zimbabwe, Zambia, Iraq, Ecuador, Israel, the United States, and many other countries, real and imaginary. He is a lifelong lover of French 19th-century art and literature and grew up in Grandville's illustrations of Les Fables de La Fontaine and Gulliver's Travels - which might have inspired his own life. She won the BBC World Service Award for Short Story of the Year in 2000 for buried bananas, a story about a Rwandan genocide survivor. Live in Geneva and find inspiration for the story characters found in many coffee shops in that multicultural city.

Jean Ignace Isidore Gérard, aka Grandville, was born in France in 1803. At an early age, he began working as a magazine illustrator and theatrical costume designer. In 1829, at the tender age of 26, he became famous for his Métamorphoses du Jour, with caricatures of humans.

The Fantastic Menagerie Tarot is one of the best-cataloged tarots in the world. 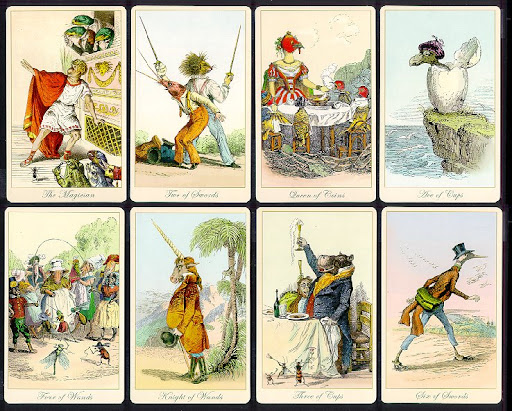