(Tarot of Romeo and Juliet)

The cards below give a small sample of the range of scenes and characters which Scapini has illustrated.

The ‘small’ booklet that comes with this deck is so physically thick that it is bound like a nice paperback book. It is printed in Italian and English and is wonderfully written by Scapini. Every card is described by him, giving his commentary, explanatory scenes from a chosen play, and often a corresponding quote or two. Some of these descriptions are quite detailed. His love of Shakespeare, Art History, and the Tarot are all apparent and amazingly intertwined. Here is an excerpt from the opening page:

“According to Frances Yates’ interesting hypothesis, it would seem that the young Shakespeare was in contact with Bruneian Hermeticism, and almost certainly with that host of ideas which, coming as they did from every side, made up a kind of substratum of thought and art in the Renaissance. It was a world in which tarot cards could find a place. Taking this as a starting point, it would seem to me that Shakespearean theatre contained the whole world of the tarot. Following this supposition - or if you wish, this personal intuition - I have tried to attribute to each of the 78 mysteries either a character or a situation in the theatre or world of Shakespeare. I have a clear preference - also because I am from Verona - for Romeo and Juliet. . . . I have kept in mind the ancient cards of the Veneto so as to create a pack with which the two lovers of Verona, between one amorous game and another, would not have thought beneath them to play with.” 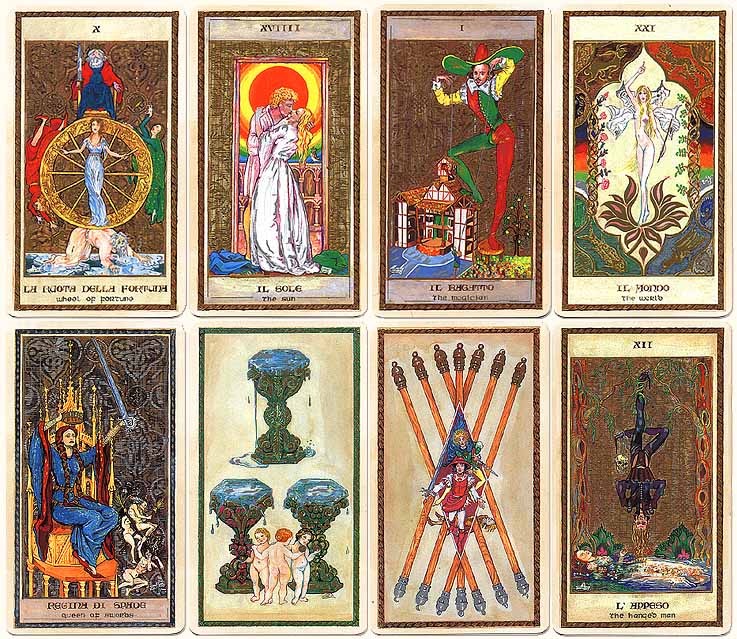