Made by the artist Josef Machynka, the Ibis Tarot deck consists of Egyptian figures and pictographs in rather lovely scenes that show up on the Major Arcana cards in this deck.

The deck relies largely on elusive imagery, like planetary and prophetic images, and the "Alphabet of the Magi".

The Ibis Tarot was created on an update of the tarot lessons in Practical Astrology, a book by Edgar de Valcourt-Vermont distributed in 1901 (nom de plume Comte C. de Saint-Germain). As an artist, Josef Machynka investigated Egyptian history and tarot-related themes to give this deck a more appropriate and open plan. Machynka was brought into the world in 1957 in Austria. He contemplated painting at the Academy of Fine Arts in Vienna and has been keen on exclusive subjects since the beginning. The Ibis Tarot keeps the essential construction of most tarot decks, yet the names and symbology mirror the way of life of antiquated Egypt. For instance, card 3 is Isis-Urania instead of the more run-of-the-mill Empress. The Fool has been supplanted via card number 22 - the Crocodile. The court cards are the Master, Mistress, Warrior, and Slave. Every minor arcana card has its number given in roman numerals. 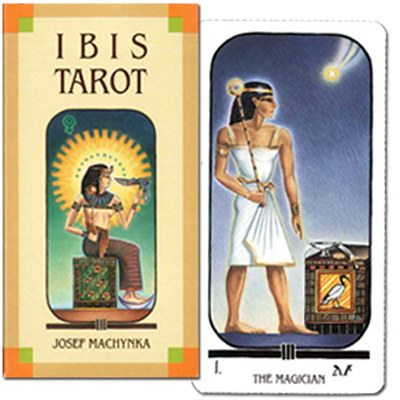