This deck, by craftsman Emil Kazanlar, was delivered as an 'Ecumenical Tarot". The workmanship is acceptable with a great deal of detail. The tones are rich and dynamic. There is additionally a great deal of imagery in the drawings, both Eastern and Western. The Major Arcana is an unusual blend of old and new. Kazanlar utilized his vision to deliver the scenes on the Majors. The High Priestess appears as though Wirth's, Strength and Temperance appear to be changed variants of the Marseilles cards of a similar name, and the rest of the Majors appear to have an Islamic impact. For instance, the Hierophant has been renamed The Prophet and portrays Muhammad (face covered up by a shroud) riding a pony. Arabic is composing sprinkled all through the Majors also. Strength is number 11 and The Fool is number 22. The Court Cards are King, Queen, Knight, and Page, and the suits are Wands, Cups, Swords, and Disks, however, the cards likewise utilize the playing card reciprocals on the right-hand line.

A fascinating multi-ethnic deck that mixes its maker's joined Christian/Islamic foundation into an intriguing and truly decipherable tarot. Brimming with engaging work of art, including some very much positioned subtleties that upgrade as opposed to bring down the general material.

The minors present us with a significantly more different combination of societies. Center Eastern, Far Eastern, Egyptian, Hindu, and European cultures are completely addressed. The Minors have considerably more imagery than the majors. The Qabalistic Tree of Life correspondence for every Minor Arcana card is on the top and lower part of every scene. Kazanlar ascribes all the court cards to En Soph. The Aces are ascribed to Kether, twos to Chokmah, and so on Kazanlar likewise gives the negative or "dark" Sephirah at the base for inversions. There are visionary images on the left, and the card number, suit, and some other image obscure to me on the right. A portion of the Minors portray scenes from folklore, and Kazanlar demonstrates these in his booklet. The scenes on the Minors are not founded on Waite-Smith.

Dr. Emil Aminollah Kazanlar was brought into the world in the region of the antiquated Persia, present Iran's capital Tehran, on 17 September 1939.

At the age of 23, he moved to his mom's nation of origin, Hungary.

In Iran, he established a manikin theater, and he examined smaller than expected artistic creation at Tehran's Fine Arts College.

In Budapest, he graduated from the ELTE's Academy represented considerable authority in Spanish and French dialects, acquired his doctorate in way of thinking, and worked at the workforce of expressions for a very long time as a Persian-language colleague.

He has worked in the Hungarian Parliament as a French, Spanish, English and Persian translator, was a writer, and worked for the Iranian international haven.

Since 1990, he had grown an interest in exclusive works of art and Tarot. 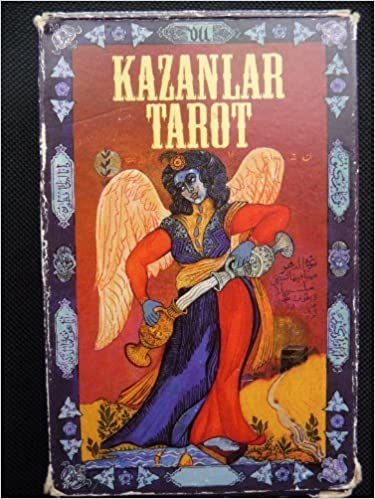