Published in 1929 and republished in 2013, the Knapp-Hall tarot deck captures the mystical and cabalistic dimensions intended by Manly Palmer Hall and J. Augustus. Knapp. This deck emphasizes the role that ancient secret teachings played in its creation and the development of human consciousness. While the Knapp-Hall Tarot deck can be used in a familiar way, the potentials for interpretation are unlimited.

The cards are housed in a shrink-wrapped tuck box with a 57-page booklet containing an essay on the artwork by J. Augustus Knapp scholar Ken Henson, M.F.A., a note from the editor Dr. Yolanda Robinson, an introduction from 1985, and commentary on each card written by Manly P. Hall.

The majors have a French influence and the minors are unillustrated. This deck is rare or out of print and isn't easy to find.

Back Design: Blue and White, with a white border, it has Egyptian pictures and symbols surrounding the word

Companion Material: The Knapp-Hall Tarot Instructions companion leaflet has an introduction by Manly P. Hall and instructions by J. A. Knapp (the illustrator). The instructions are a reprint of the booklet, "Divination with Tarot Cards". In addition to a brief history of tarot, a mnemonic for remembering the order of the Majors, the significations of the cards, and directions for divination (including 5 spreads 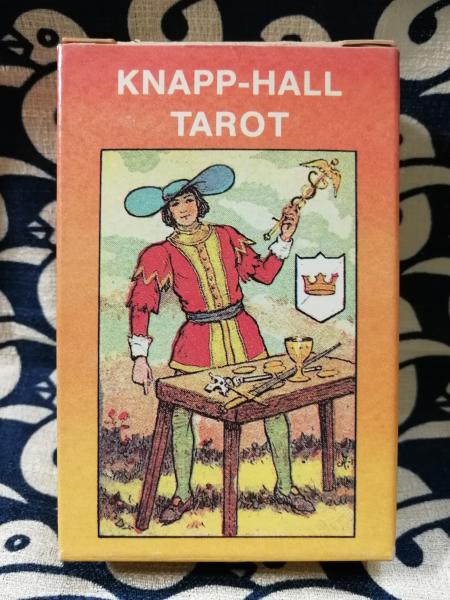