Limited and numbered edition by Meneghello

This deck is a facsimile edition of the historically important set of prints originally created in 1470, and (perhaps erroneously) attributed to Andrea Mantegna (1432-1506).

Briefly, the 50-card Mantegna deck depicts ten archetypal powers in five classes: the Conditions of Man, Apollo and the Muses, the Liberal Arts, Cosmic Principles, and Firmaments of the Universe. Numbered from 1 to 50, each card illustrates one step in a hierarchical progression of the universe. It is interesting that this variant series of images appeared on the scene at about the same time as the Visconti Sforza images, or possibly a few years thereafter. In many ways, it shows a more ordered arrangement than its 'sibling' deck. Whatever their family relation is, most of the Trumps of the Visconti-style decks can be found among the 50 Mantegna images.

More history on these famous prints, and a complete set of images, can be found online. http://levity.com/alchemy/mantegna.html, is a  good place to start. One very interesting theory was briefly touched on by Stuart Kaplan in his Vol I Encyclopedia of Tarot. Each of the five decades in the 50 card deck has one of five letters in the bottom left corner: E, D, C, B, and A. Kaplan suggests the idea that these letters might be abbreviations for Espadone, Denari, Coppe, Battoni, and Atutto. The ten A-cards do belong to the ten highest trumps (41-50).

There is an instruction pamphlet with this deck, printed in Italian and written by Giorgio Tavaglione. He also gives elemental correspondences to the five decades, though these are different than the correspondences given above. He gives Earth to group E (and called by him 'Social Orders'), Water to group D (which he calls 'Orders of Emotion and Art'), Air to group C (which he calls 'Orders of Knowledge and Science'), Fire to group B (called 'Orders of Virtue') and a fifth element, Quintessence, to the A group (he calls 'Spiritual Potencies'). These correspondences make much more sense, clearly showing logical connections between the elements, the subjects depicted, and an ascending hierarchical order echoed in the elements moving from the densest to the most rarefied state.

Unfortunately, that is about all I am able to translate from the Italian text. The booklet is only 16 pages, but I suspect it has some illuminating commentary by Tavaglione.

This limited/numbered (of 1000) edition was printed by Meneghello in Milan, Italy in 1988. The card designs visually simulate the original engravings of the "E Series" of prints, including the random discolorations of old paper. There are two extant sets of original Mantegna prints, but the other "S Series" is inferior in quality, so was not used by Meneghello. I believe that the only other facsimile edition of the Mantegna prints ever printed was by Edizioni del Solleone in 1981, who also used the "E Series". The Solleone edition was also printed in a limited edition of 1000 and is unavailable as far as I know.

The images are nicely printed in black and have an uneven line quality which gives a clue to the age of the originals. These cards are quite large, 3 3/4 by almost 6 inches high, on a very high-quality uncoated stock. They are packaged in a beautifully made wrap-around bound cardboard package with black tie-ribbons and a label with a wax seal. The package itself is beautifully done.

This deck probably wouldn't do much for most people because of its simplicity and somewhat crude look, but I think it would appeal to those who are partial to adding historical decks to their collection, and to those who want to have on hand a wonderfully produced record of tarot's iconic history. 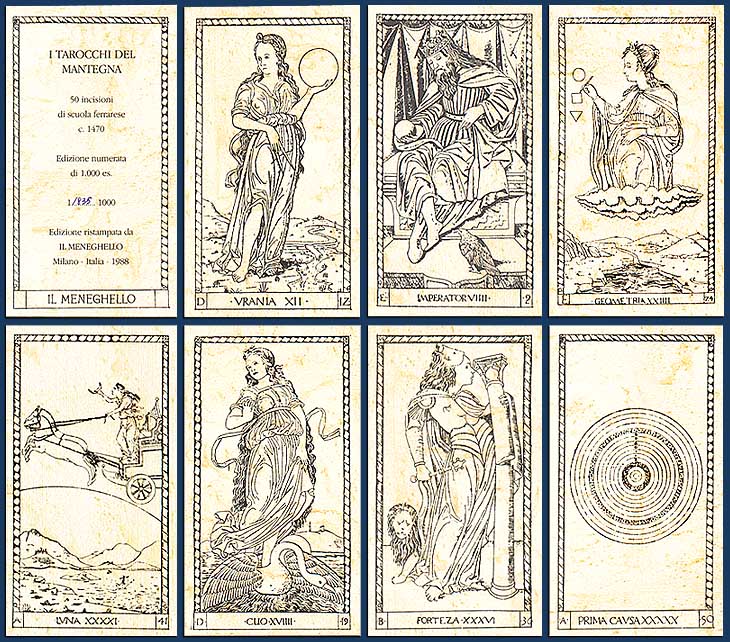