The Miracle Tarot depicts the Fantasia-like world of Reiko Shimizu. Published in 1993 by Hakusensha in Japan, the set includes a book and 78 cards which are packaged in a beautiful and sturdy slipcase. Since the book is written entirely in the artist’s native language, however, many of us will be left to interpret his illustrations on our own.

While the package is deceptively compact, the deck itself is not; the cards are held as two stacks within a foam die-cut, and when both stacks are brought together the complete deck is over one and a half inches thick. Measuring about 2Ľ by 4ľ, each card is quite thick and the actual deck would present a challenge to anyone hoping to shuffle it in the usual way.

A strong calligraphic influence can be seen throughout the designs, as in the flowing hair of Justice, in the exaggerated elongation of her sword, in the tail feathers of the Ace and Knight of Wands, in the swirl of fish on the Ace of Pentacles. The Ace cards are particularly striking, each featuring a different animal totem: rooster for Wands, butterfly for Swords, water-serpent for Cups, and fish for Pentacles. Some of these are brought into The Magician, who is shown above with butterflies, fish, and flying mermaid.

Shimizu’s trumps are nicely rendered and colored, but are not really the most interesting designs in the deck; he seems to have had much more fun with the highly detailed court cards. Each depicts a world unique to its suit. The Page, Knight, Queen, and King of Wands are all illustrated in a sunny yellow, with birds or bird feathers figuring into their costume; King of Wands (not shown here) is striking because of the dove perched in front of a shark’s jawbone. The Sword personages are fairy-like, each having butterfly wings on its back and all in magenta and orange tints. The court of Cups is merfolk with crustacean horns, scale-like bodies, and water-serpent familiars in an underwater hue of blue-green. The Pentacles are in tones of blue-violet, each equipped with fish fins and lavish necklaces of gold coins. Many of the court figures wear highly detailed ornamentation.

The numbered suit cards are illustrated in a style typical for many Japanese decks, which is to say they show patterned arrangements of suit symbols. For some reason, Japanese Tarot artists are not prone to adorn their pip cards with ornamentation or scrollwork, such as we often find in Italian, French, and Spanish decks. Still, this simplicity is aesthetically attractive, and I can even picture these cards being extracted from the larger deck and used for traditional card games.

This set may not win over with every card, but it does have some elegant illustrations. It is also beautifully produced, with thick glossy cards that should last a very long time. Since I bought this set a few years ago, I am not sure of its current availability but I suspect it can be bought through Japanese retailers. The Miracle Tarot also appears from time to time on eBay, usually at prices comparable to American book-deck sets. 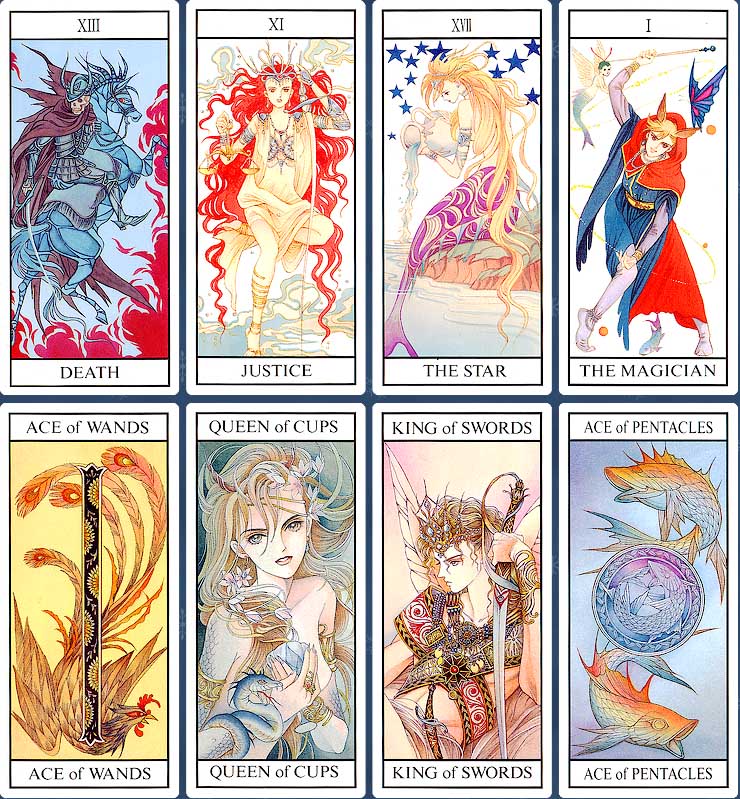