Tarocco di Alan, reprint of a deck by Argio Orell, 1981

This 78-card deck was produced in 1981 by Modiano of Trieste, Italy. However, it is actually a reprint of an earlier deck, brought back to production by Mauro Boldi, AKA Alan, who is described by this deck’s booklet as an astrologer, card reader, and healer in Milan. Alan was not the artist behind this deck, though it bears his name. There is another Modiano deck which is called the Tarocchini di Alan and is also sometimes translated as the Tarot of Alan. But that is a 55-card deck with different illustrations by an artist named E. Gabbrielli.

Argio Orell was the artist of our deck here. He was recognized by the turn of the century as one of Trieste’s finest artists and had achieved critical and popular success at several exhibitions. His work was highly influenced by the styles of Art Noveau, Art deco, and Japanese prints. Orell designed this deck in 1910 as a commission from the Austrian-Lloyd Steamship Lines. Because of the double-ended designs, there are essentially 44 different images on the Trumps, and once this deck gets shuffled the only way to determine whether the cards are up or upside-down would be to refer to the little booklet because of the design on the card backs are symmetrical! Some of the Trumps feature steamships apparently owned by the shipping line, the other Trumps show scenes that might be encountered at various ports of call. Stuart Kaplan includes some of these Trumps in his Encyclopedia of Tarot Vol. I, on page 316 under the name Exotic Tarot, which is the name by which the deck was sold in America. He says that the deck was originally a 54-card pack but was expanded to 78 cards for the reprint.

The Alan Tarot combines 22 highly detailed Trump illustrations, 16 equally elaborate court cards, and 40 suit cards that, in contrast to the rest of the deck, show the simple club, spade, heart, and diamond patterns that any Hoyle deck might have. The court cards feature people in richly detailed costumes representative of four cultures: the Orient for Clubs, Spanish for Spades, Arabian for Hearts, and Egyptian for Diamonds. The 48-page booklet is helpful mostly for its details of the Trump illustrations. It gives explanations of the ‘upright’ scenery, their interpretations, and comments on the reversed scenes and their meaning. The illustrations and the variety of cultures depicted are very interesting in themselves, but reading the booklet really helps to make some sense of what is happening in these miniature stories. The scenes depicted, disparate as they appear, usually bear a vague relationship to traditional Tarot Trump meanings. Here are some excerpts from the booklet describing a few of the cards below; for brevity, I have edited out most of the divinatory comments for each:

IX. The Sanctuary: The sanctuary, protected by a stretch of water and by houses close together at the foot of a hill, dominates the quiet, deserted scene. The pilgrim, who has come from afar, is afraid of actually reaching the sanctuary - an unspoken challenge keeping him on the shore due to a premonition of misfortune. In fact, the sanctuary is empty. Reverse: To cross the stretch of water to the sanctuary by whatever means available is a temptation, but it is a dangerous one. Once the objective is achieved, it would prove both disappointing and costly. Advice: curb impetuosity.

V. The Guardian Dragon: A dragon with menacing aspect, with its mouth open and fangs ready to bite, protects a garden and a house. There is no danger for the people inside, however, for it is the people who approach from the outside who must fear the dragon’s fury. Nobody whose intentions are not friendly can enter, and whoever enters secretly or in disguise shall be put to flight. Behind the dragon safety reigns. Reverse: Being confident of a smooth journey will prove ill-founded. In fact, everything rests on the water and there is no protection at the moment of sinking to the bottom. Precautions are necessary and so look for somebody who can give support and protection.

XVIII. Fate: An old palmist reads the hand of a young, beautiful woman. She tells the girl of luck, love, and money, but in her heart, she feels envy and regrets her lost past. The girl withdraws her hand to stop the reading as if, all of a sudden, she learns that she too will become like the old woman, ugly and despised in her poverty. The girl hates the old woman, for she has understood that the old woman is in fact herself. Reverse: It is not certain if one’s luck will improve, and in any case, it moves at the same pace as a growing plant.

II. The Sea Voyage: This card represents a ship majestically plowing through the waters of a calm sea. It is a slow but safe journey, without choppiness or sudden changes and the destination will certainly be reached. Life onboard goes on at a slow and relaxing rhythm. The sailing is so smooth that the ship seems to be still, but the joy expressed upon arrival will show that it has been a long voyage. Reverse: Transience is the opposite of stability and it seems that goals can be easily reached simply by an act of willpower or by illusion. However, everything is set on water and waves; once the leaf falls, everything returns to what it was as if nothing had happened.

III. The Empress: The empress is a woman whose position shows that she makes unconditional use of the characteristics of her sex: seduction but also willingness and weakness, though with complete confidence at the same time. But she is not only a woman, she is an empress and therefore wields great power and assumes great responsibility. Reverse: A reversed picture represents the negative aspects of femininity. A cunning rather than intelligent woman, intriguing rather than strong.

This deck is beautiful in its intricate illustrations and its array of cultural settings. 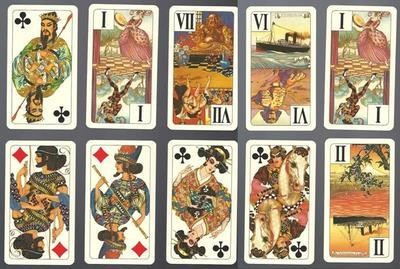