Valentina Visconti, was the daughter of Gian Galeazzo Visconti, Signore di Milano. One of the theories of the origin of tarot was that when she attended the Palio d'Asti in 1389 she may have brought her tarot cards to the attention of King Charles VI who had these redrawn in 1392 by Jacquemin Gringonneur and thus brought them to the wider world. This is an attempt to reconstruct this early tarot. The artists try and reflect the art style of the 15th century.

The cards are black and white and are made of a yellow/cream corrosive-free card, thicker than normal, and is unlaminated. A 88 card deck, sandwiched between the Major Arcana and Courts and the Minor Arcana, there are ten additional cards. Like the remainder of the deck, they are fragile high contrast line-drawings and have the Italian titles Anchovies, Racing Silks, Rooster, Freedom, Astuteness, Intrigue, Courage, Spurs, Money, and Acquaintance.

More modest than most Tarot decks, they feel truly decent in the hand because of the thinness of the cards. 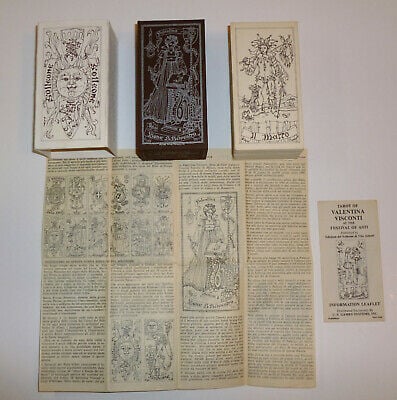