An absolutely stunning display of lavish gold foil and exquisite Renaissance art, this deck is pure magic and mystery, the shimmering gold reflects the light, seducing the intuition and delighting the eye. This deck is a treasure, truly a must-have for all Tarot enthusiasts. Originally commissioned in 1450 by the Duke of Milan, and attributed to Bonifacio Bembo, this is a reproduction of the oldest extant Tarot deck. This product includes 78 full-color cards and 9 cards with instructions. No booklet included.

Perhaps the oldest - and certainly the most complete - example we have of the Tarot is known by a variety of names. Attributed to Bonifacio Bembo, they were commissioned in 1450 for Filippo Maria Visconti, the Duke of Milan, Italy. Because they weren't finished until his successor, Francesco Sforza, was in office, this deck is often called the Visconti-Sforza Tarot or simply the Visconti Tarot. 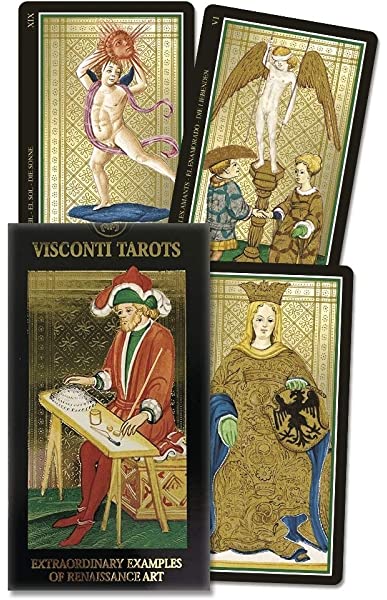