I was curious about this particular deck ever since I saw it years ago in Kaplan’s Encyclopedia of Tarot Vol.III. When it made a rare appearance at an online auction, I finally seized my chance. The deck was published in 1984 in a limited edition of 1000.

The deck contains 22 very detailed pen and ink illustrations. These unique designs are similar to totem poles in that they are vertical conglomerations of objects, creatures, and abstract shapes. Both ancient and modern objects are incorporated into the designs. These symbols, however, are left completely unexplained, as there is no booklet included with the deck.

The High Priest, depicts two seated figures supporting two standing figures. The object on the top platform appears to be a large bone, crowned with a five-star pentacle. The shapes all seem to be rising or pointing upward.

Also, The Devil, which depicts a wonderful little horned demon holding a staff. An inverted pentagram sits above his head. The bottom half of the card includes an additional image, upside-down, showing a man holding a chalice against a starry sky. A woman is sleeping in the clouds behind him, under the light of the moon. The bottom of the Demon’s staff becomes a serpent wound around the man’s chalice.

The last Trump, The World, shows a small segmented globe, with apparently two out of twelve sections missing. A small moon orbits the globe. Behind them is a ‘figure eight’ strip of paper, one side of which seems to be perforated with binary data similar to punch cards used in early computers. The other side of the strip shows a ring of human figures dancing hand in hand. The position of the globe within the lower half of the infinity symbol, with the ‘data’ side above and ‘human’ side below, may signify that our world is playing out of higher patterns. Behind these symbols is a section of the film with nondescript snapshot images.

Two additional cards are included. One is a totem design that serves specifically as the deck’s title card. It is interesting that this card, as well as the packaging, shows the deck’s actual name as Bilder Zum Tarot, meaning Tarot Pictures or Tarot Images. Nowhere is any other name used. The second extra card contains a poem, which is the only text included with this deck. The italicized words below are those that are enlarged for emphasis in the original text. The English translation reads:

“The Magician, who becomes the High Priestess, connects the Empress and the Emperor with Love. Driving in the Chariot, they meet the Hermit on the road of Justice. In the meeting, they find that Strength that moves the Wheel of Life with the same ambiguity as an Artist illustrates Death: as Temperance and as Devil.

Our Destruction will take place if we do not detect the Stars; the qualities of the Sun and Moon are the Awakening of our World. We leave it as Fools if we do not dare from time to time to look into the Mirror.” 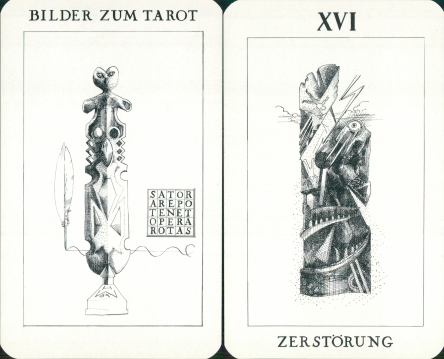