The Nazi Regime to a fault regarded KKK as a useless, idiotic entity.

Amt D of Ausland-SD, the foreign intelligence office of the SS responsible for the American sphere, contacted various organizations in the United States for various purposes. Practically the only usable contact that the Amt D plain ignored was the KKK, which they didn’t even touch with a pole, and when the KKK instead made advances towards the Germans they were ignored.

Ku Klux Klan was regarded by the Nazi leadership as idiots, to the point that their famous imagery took on a prominent role in portrayals of the American enemy in propaganda posters.

Hitler deliberately genocided the white European population. Hitler was the opposite of the Ku Klux Klan. KKK is a white supremacist organization, also pro-Christian and pro-American. In 1941 Hitler declared war on the USA, personality killed many French soldiers during WW1 then genocided 50 million white Christians in Europe during WW2. For God’s sake, how people even managed to bite that Nazis were white supremacists baffles me. The vast majority of the victims of their genocidal acts were either European Jews or all manner of Slavs, both of which were as white as it got, while a considerable number of non-whites scored above the European Jews. The ‘Mediterranean Race’ comprising of southern Italians, Greeks, Spanish, French, as well as Persians, Japanese, Turks, Arabs, and many other southern groupings were allies of Hitler and by National, Socialists considered “Aryans”, non of them was a sub-human according to Hitler.

People mistakenly connected KKK to Hitler. KKK has nothing to do with Hitler because Hitler hated Europeans. Hitler exterminated more than 50 million white people in Europe by starvation, by slavery, by bombing, by bullets, by freezing, by burning in the Auschwitz ovens. All people burned in concentration camps were white Europeans. In fact, Germans have never been white supremacists. In the 20th century, seeking European domination Germans exterminated 200 million Europeans by launching two bloody world wars, by organizing revolutions and civil wars. As a result European civilization demographically is dying. Hitler has never been a racist in American or British understanding of this term in accordance with the standard 4-race classification by skin color. He was an antagonist of the KKK.

Is it appropriate to label the Klan of the 1920s "fascist"? Surely it is one of the most overused terms in contemporary discourse. Yet, Paxton points to the first Klan as "the earliest phenonemon that seems functionally related to fascism." "In its adoption of a uniform (white robe and hood), as well as its techniques of intimidation and its conviction that violence was justified in the cause of the group's destiny, the first version of the Klan . . . was a remarkable preview of the way fascist movements were to function in interwar Europe." Nancy MacLean, in Beyond The Mask Of Chivalry: The Making of the Second Ku Klux Klan (1994), makes a similar argument: "Not only in its world view, but also in its dynamics as a social movement, the [second] Klan had much in common with German National Socialism and Italian Fascism." Klan leaders of the 1920s and 1930s acknowledged this kinship themselves, she points out. 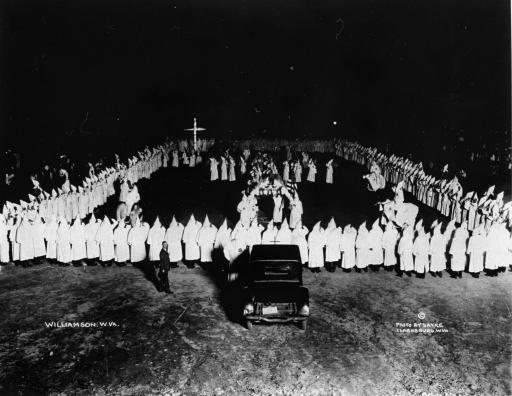