The Genocide Of The Mayan Peoples In Guatemala

"The Army doesn't massacre the Indians. It massacres demons, and the Indians are demon-possessed; they are communists. We hold Brother Efrain Rios Montt like the King of David of the Old Testament. He is the king of the New Testament. "

The genocide of the Mayan peoples in Guatemala (see my comment in the previous post), which was largely inspired by the country's president, military man Ephraim Rios-Mont. Ephraim Rios-Montt, before becoming dictator and president, was the pastor of an Evangelical Pentecostal Church in the center of California. He was very fond of President Reagan and the same Pat Robertson who called for the assassination of Hugo Chavez. (see below)

Rios Montt pursued a "scorched earth" policy in Indian villages. his motto was: "If you are with me, then I will feed you. If you are against me, then I will kill you." As a Protestant minister, he especially hated Catholics (although he had previously served the Catholic Church as well). In general, everyone got from Rios Monta. including competing Protestant pastors. The brainchild of Pat Robertson, the Gospel Outreach Church is believed to have been involved in the Mayan genocide. Here is what one of the American pastors of this church said, praising Rios Montt (note, this was said by an "apolitical" Pentecostal - would you also consider him a scum that arose on the pure body of the church?):

"The army does not kill the Indians. It destroys the devils, and the Indians are possessed by the devil - they are communists. We honor Brother Ephraim Rios Montt as King David of the Old Testament. He is like the King of the New Testament."

It is interesting to note the fact that in the early eighties (the beginning of which accounted for the largest number of victims of genocide) Indians in Guatemala en masse entered the ranks of the evangelical church - not for reasons of conviction, but in order to save their lives. It was the Pentecostal churches based in the USA that gave money to "pacify" Indian villages (David Stoll. Is Latin America Turning Protestant? The Politics of Evangelical Growth)

Here is a note on Wikipedia about this church - it is a Pentecostal / Evangelical church with headquarters in the USA directly implicated in the genocide of the Indian population of Guatemala:

The Church of the Word (La Iglesia del Verbo) - pay attention to the facts about Rios Montt. 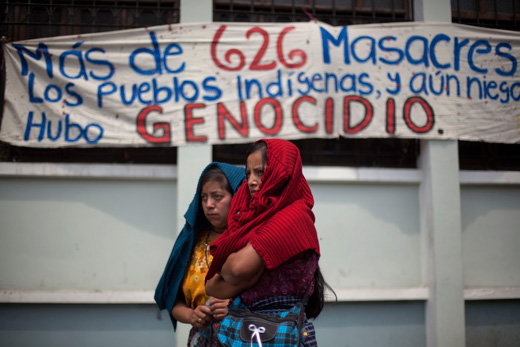