Turkey began World War II bound to Great Britain and France by the military alliance of October 1939, moved to non-belligerency in June 1940 after the fall of France, and adopted a policy of "active neutrality" in the spring of 1941 after the German occupation of the Balkans and the conclusion of a German-Turkish Treaty of Friendship on June 18, 1941.

The Germans had substantial economic interests in Turkey. There were two Germans banks in Turkey, the Deutsche Bank, Istanbul, and the Deutsche Orient Bank. Six German insurance companies had branches in Turkey. More than 60 German-controlled firms were engaged in trade, transportation, and industry in Turkey. German firms were active in enterprises such as building materials, chemicals, and pharmaceuticals, shipping, forwarding and transportation, machinery and electrical equipment, tobacco merchandising, commission agencies, importing, and exporting. There were German interests in at least 50 other firms in Turkey. These include organizations represented by I.G. Farben, Krupp, and Bayer.

Also doing good business in Turkey were the branch banks of two major German banks, the Deutsche Bank and the Dresdner Bank. They took advantage of the high prices on the Turkish free gold market to sell looted gold provided by the Reichsbank in return for foreign currency, particularly Swiss francs. Profits from the banks' Turkish gold trade were used to finance not only Germany's diplomatic, espionage, and propaganda activities in Turkey, but also the operations of various other Axis and "Axis friendly" Legations

In October 1941 Germany concluded an important trade agreement with Turkey that provided for an exchange of Turkish raw materials, especially chromite ore, for German war material, together with iron and steel products and other manufactured goods, in order to draw Turkey further into the Axis orbit. In 1943 Turkey provided essentially 100 percent of German requirements. According to Albert Speer, Hitler's Armaments Minister, the German war machine would have ground to a halt without chromite ore.

During most of the war, Turkey sought to balance the needs and expectations of Germany and the Axis on the one hand, and those of the Allies on the other. Thus, while being a major trading partner with Germany, Turkey maintained its friendly relations with the Allies, which provided Turkey with modern military equipment, and who sought to minimize the effect of Turkey's exports to Germany by preclusively buying products, particularly chromite, at exceedingly high prices. Turkey conducted such robust commerce with both sides that it raised its gold reserve from 27 tons to 216 tons by the end of 1945.

Turkey also played a significant role in the rescue of Jewish victims of Nazism throughout Eastern Europe. More than 100,000 Jewish refugees are estimated to have passed through Turkey during the war. The Turkish Government sent trucks and ships to neighboring Balkan nations on rescue missions, and Istanbul served as a center of activity by Jewish representatives seeking to arrange for the flight of Jewish victims in Central and Southeastern Europe and to facilitate their onward passage to Palestine.

During 1943 and into 1944, Turkey continued to receive Allied military assistance but resisted entry into the war. Allied pressure, persuasion, and preclusive purchasing did not succeed until early 1944 when it was supplemented by threats to apply to Turkey the same economic measures earlier used against other neutrals. Turkey halted the export of chromite to Germany in late April 1944 and suspended all commercial and diplomatic relations with Germany in August 1944. Turkey finally declared war on Germany in late February 1945. But at no time were they, active combatants, for the Allies.

Turkey's neutrality during the war blocked Germany's access to the Middle East, thereby depriving Germany of an Arab alliance. Their neutrality, however, prevented the Allies from opening the Second Front in the Balkans, they're barred the Straits for shipments to Russia.

Early American experts estimated that Turkey received as much as $10 million to $15 million in gold during the war, much of it probably for its chromite exports. After the war $3.4 million in Belgian monetary gold looted by the Nazis was traced to Turkey. Other German gold acquired by Turkey during and after the war included coins and ingots from the account of German Foreign Minister Joachim Ribbentrop at the Reichsbank, which had been stocked with gold looted from occupied Europe.

Turkey's declaration of war against Germany vitiated Allied efforts to gain Turkish support for the Safehaven program to locate German external assets and prevent their use for a Nazi resurgence. However, the Allies conducted formal negotiations with Turkey over the restitution of looted monetary gold and the application of liquidated German external assets to the reconstruction of Europe. The Allies estimated total German external assets in Turkey at over $51 million in 1945 and possibly as much as $71 million in 1946. Turkey was willing to discuss assets with the Allies but insisted that they be applied to the settlement of Turkish war claims against Germany before the remainder might be shared with the Allies.

The Allied efforts to obtain agreements with Turkey in 1946 for the restitution of gold and return of German external assets were never pressed with vigor and were overshadowed by a major change in relations between and among the Allies and with Turkey. In 1946, in the wake of threatening Soviet gestures toward the Dardanelles and the Soviet-Turkey border, the United States quickly came to see Turkey as a cornerstone of the emerging Western strategy of containment. The Truman Doctrine in March 1947 to include not only Greece but also Turkey was followed in July by the signing of an aid agreement with Turkey worth $150 million.

The July 1947 agreement doomed negotiations with Turkey over gold and assets. In that month Turkey was willing to return more than $4.3 million gold but was unwilling to accept further Allied demands for information.

By the spring of 1951, the Allies had agreed to relinquish their claims to German assets in Turkey in return for the settlement of the gold issue. A May 1952 Allied note to the Turkish Foreign Minister agreed to settle the gold issue for $1 million, relinquished the Allied claim to the German assets, and allowed Turkey to keep the proceeds from the liquidation of German assets. By 1953 the Allied abandoned further efforts to obtain from Turkey the restitution of gold or the application of external assets to the victims of Nazi persecution. 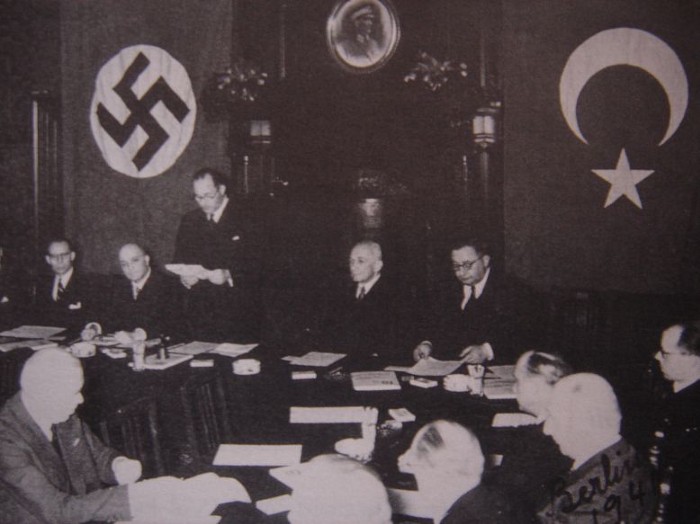