Before proceeding with the problems of heir-less assets, a brief look at what could be called gold stories, legends, or myths, in order to shed additional light on the missing Nazi treasures. The biggest hoard still missing is that of Bormann's Aktion Feuerland project. Undoubtedly, there are as many myths as there are facts surrounding Bormann's treasure. Some have taken on the aspects of legends. Thus the reader is forewarned that what follows concerning this hoard may be partially false. What is known with certainty is up until June 1944, Bormann transferred his loot across France in trucks to Spain. In Spain, the treasure was transferred to U-boats, which then made the voyage to Argentina. After D-Day with the land route closed to Spain, Bormann continued his transfer of assets to Argentina by air. Author, Ladislas Farago claims that the virtually complete record of this operation is preserved in the archives of Coordination Federal in Buenos Aires, in the FBI files, and in the archives of the British Admiralty. The latter assumed the U-boats were on regular patrol.69 Farago claims the shipments began in 1943 and arrived on a regular basis spaced at six to eight weeks apart. He states the money and gold were deposited in the name of Eva Peron.

According to Farago, the Perons managed to gain control over much of Bormann's treasure, and in Eva's Rainbow Tour of Europe; she deposited over $800 million in numbered accounts in various Swiss banks. Farago lists the treasure as:

Farago's list of Bormann's treasure above has been partially verified by Adam Lebor, as he specifically lists the same quantities of gold and diamonds. Although Farago starts the gold deliveries before the Red House meeting, the Allies first became alarmed at the Nazi gold transfers in 1943. Allied intelligence believed that much of the first gold to arrive in Argentina was used to finance the Nazi espionage web in South America.

One legend concerning Argentina and Nazi gold claims that in the closing days of the war a fleet of Nazi U-boats containing the Nazi treasure and top Nazis, including Hitler left Germany for Argentina. En route to Argentina, they encountered an allied naval task force and a battle resulted in the loss of several allied ships, which the United States continues to deny. Recently, additional evidence surfaced in Pravda shedding new light on the legend. It is known that ten U-boats were dispatched to Argentina in the last days of the war. Pravda claims that at least 5 of them reached Argentina with no less than 50 top Nazi officials. During the trip, the U-boats sunk an American battleship and the Brazilian cruiser Bahia with a death toll of more than 400, including US citizens.

Pravda claims the US ship was the USS Eagle 56. However, the US Eagle 56 was sunk on April 23, 1945, off the Maine coast towing targets for dive bombing practice. Only thirteen of the 67 crewmembers survived. The navy maintained the ship was sunk by a boiler room explosion until recently, finally acknowledging that the USS Eagle 56 had in fact been sunk by U-boat U-853. U-853 was sunk on May 6, 1945, in the North Sea southeast of New London.

The Bahia was sunk by U977, which surrendered at Mar del Plata, Argentina on 17 August 1945, and was turned over to the US for testing. Four US radiomen: William Joseph Eustace, Andrew Jackson Pendleton, Emmet Peper Salles, and Frank Benjamin Sparksere were aboard the Bahia and were killed. The US Navy still lists the men as missing in action. Brazil ascribes the sinking of the Bahia to an onboard explosion.

The article in Pravda was based on information from Argentina researchers Carlos De Napoli and Juan Salinas. They claim that a fleet of almost 20 U-boats sailed from the Norwegian port of Bergen, between May 1st and May 6. They joined another group of U-boats coming from the US coasts around Cape Verde. There they learned of the surrender. Some scuttled their boats, others surrendered, and still, others set course for Germany. However, at least six of the U-boats proceeded for Argentina. Further, the article claimed that the Argentina Navy was ordered to stop attacks on German U-boats operating close to Argentina beaches, on orders from Churchill. Farago for one has confirmed that the Argentina Navy was issued such order by Peron. He does not, however, mention that the order came from Britain.

The Pravda article contains a serious error in the name of the US ship sunk. Due to the controversy of the sinking being listed as a boiler explosion when the survivors reported seeing a trotting horse on a red shield on the conning tower, the sinking of the USS Eagle 56 has been thoroughly investigated. However, the article contains much information known to be true, including the listing of two of the U-boats: U-530 and U-977. U-530 surrendered in the Mar del Plata, Argentina on 10 July 1945. It was turned over to the US for testing. Other information has been partially confirmed by other investigators. It is also known initially, the US didn't believe the report of Hitler's suicide at first and launched a search in South America for him and other missing top Nazis. After surrendering, the commander of U-977 Heinz Schaeffer was arrested and charged with smuggling war criminals to South America.

Interestingly, U-530 appeared to have been stationed around Cape Verde in 1944. On June 23, 1944, U530 rendezvoused with the Japanese sub-I-52 to transfer a radar detector about 850 miles west of the islands. The Allies were aware of the transfer and allied planes managed to sink the Japanese submarine. The I-52 was located in 1955 and still contains 2 tons of gold.

Additional information surfaced in 1997 in Argentina. The national newspaper, Ambito Financiero, was contacted by a man giving his full German name and his commander's identity number. He claimed he arrived in Argentina after scuttling his U-boat. In the 1970s, a different person making the same claim contacted the same paper. This U-boat commander wrote that, on Hitler's specific orders, ten submarines, each with fifty officers and crew, were to sail to Argentina to help found the Fourth Reich. Recently, more information on this fleet of U-boats came from Norway. There, a person claiming to have allegedly worked in an archive department of the Nazi Navy, a large part of which was stationed in southern Norway during the War, discovered additional documents that collaborate with the Argentina information. Other researchers have long claimed two U-boats were scuttled after unloading their cargo of documents and gold in shallow water, which would confirm the two contacts with the paper.

Further confirmation of the Nazi's plans comes from the surrendering of U-234 at Portsmouth, New Hampshire on May 16, 1945. U-234 was deported from Norway on April 16, 1945. While at sea in the North Atlantic, U-234 learned of the surrender and the order from Doenitz to abandon operations and surrender. The list of the cargo of U234 follows:

The U-234 however, was destined for Japan. The uranium oxide cargo was intended for Japan's uranium enrichment project at Hungnam in northern Korea under the direction of Dr. Nishina. The technical documents helped immensely in the understanding of Japanese defenses. The blueprints also hastened the development of US advanced weaponry. While the U-234 was not part of the escape to Argentina, it lends credence to the Nazi's ability to transfer their technology abroad and gives the idea of the scope of that transfer. In fact, there was a great deal more cooperation and transfer of technology between Japan and Germany near the end of the war than previously believed.

In Gold Warriors the Seagraves confirm this trade of uranium between Nazi Germany and Japan. They report that Japanese cargo submarines were used to haul gold to the Nazi sub-base at Lorient, France to pay for the uranium purchases. German U-boats and fast surface raiders hauled the uranium to rendezvous points in Indonesia and the Philippines. From these rendezvous sites, Japanese subs hauled the uranium to its final destinations in Japan and Korea.97

Additionally, Argentina was linked to the Nazis through the Austrian Hirtenburg munitions company. Hindenburg was linked closely with New York's J. Henry Schroeder Bank through a Swiss holding company, Herbert AG, and the Argentine SA de Finanzas. The New York J. Henry Schroeder Bank was a branch of Schroeder Rockerfeller Co-Investment Bankers whose three owners during the war were Avery Rockefeller, Bruno von Schroeder in London, and Kurt von Schroeder of Cologne in Nazi Germany. Nelson Rockefeller was in charge of South American security during WWII; however, he never took any steps against this conduit between Argentina and the Nazis. Testen Corporation connected to Goering served as a financial link between the Bahamas and Cuba with Nazi Germany. The Bank of the Bahamas was linked with the Mexican Banco Continental and the Stein Bank of Cologne and was used to create offshore accounts for Gestapo agents in the United States.

This brief look at the Bormann treasure transferred to Argentina readily illustrates the difficulty of sorting fact from fiction in the tales of Nazi loot. Author, Uki Goni has also presented proof of the difficulties encountered in relying on Argentina records. He has found that those records have been purged of incriminating files on at least two different occasions.53 The full truth of the Bormann treasure may never be revealed unless the United States and England declassify all documents from WWII. The Pravda article was obviously inflated largely along the lines of the Soviet suspicions of the time. However, setting aside its faults, it sheds additional light on Bormann's operation that the United States and England would like to see buried. Additional searches for German U-boats along the Argentina coast are already being planned. Any discoveries would only serve to confirm more of the Pravda article as well as the contacts made with the Argentina paper. 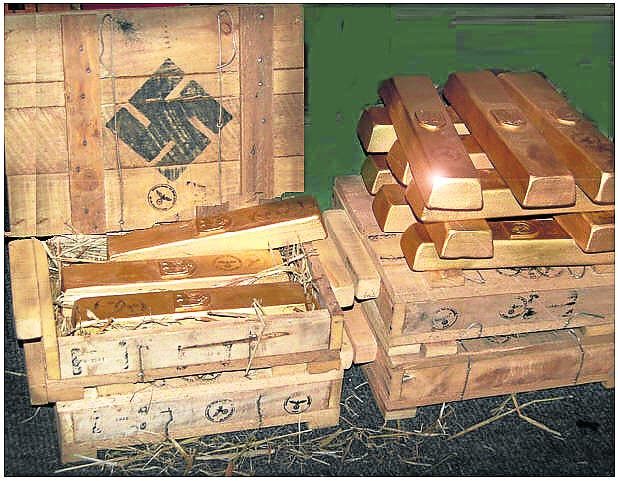