The Nazi Hydra In America Intro

The Nazi Hydra In America is currently an ongoing work in progress. The Nazi Hydra was conceived to fill a gap in the literature by providing a detailed overview of the influence of fascism within the United States. The intent and motivation for such a project were twofold: to sound an ominous warning as to the direction this country is taking at the hands of the right-wing and to provide a convenient all-encompassing source on fascism in the United States for the reader. In this regards the chapters are heavily documented. When complete the book is projected to span sixteen chapters. Chapters will be made available on this website as they are completed.

After over five years into this project, I now understand why such a book was never attempted before. Such a detailed accounting of fascism with the United States would literally fill volumes. Since this is an overview many of the details had to be omitted. Hence, throughout the book, I urge the reader to read the sources for further details.

Beginning the project I naively thought I had a good understanding of the scope of the problem and that I could complete the entire book in two years. Before a year had passed I found that many of my assumptions were incorrect and the project would last much longer. In fact, nothing from the original outline remains unchanged. Even the title was changed to better describe the book. New chapters were added and old ones deleted. But then such changes are the hallmark of good research.

The real danger from fascism is that it is so insidious that it can creep into every aspect of our daily lives unnoticed, including religious groups. In fact, many religious groups were founded by fascists in the 1930s and played a large role in propagating fascism throughout the country. For the reader looking for a quick definition of fascism, the slippery slope to fascism begins when the government puts the interests of corporations ahead of the rights of the people and their interests. Remember only people have rights; paper institutions created by society have no rights; they only have an obligation to serve the public. When they fail at that they have lost the right to exist.

Some readers will undoubtedly find the Nazi Hydra disturbing. They shudder at reports of another Nazi war criminal being deported and the crimes against humanity that he inflicted onto others. They fear to ask the question of how such a person could slip into the country or how many more are present. Others may be livid with anger as the Nazi Hydra details the associations of the Republican Party and past presidents: Nixon, Ford, Bush, and Reagan with Nazi war criminals. But history cannot be rewritten and it's a story that must be told. Those that supported Hitler and the Nazis during the 1930s and 1940s are no less guilty of war crimes and crimes against humanity than the Nazi war criminals and should have suffered the same fate at the end of the hangman’s rope at Nuremberg,

In tracing the roots of fascism from the 1920s to the present the one aspect that I find the most amazing is how small the click of hard-core Nazis supporters is. The truth is fascism in America revolves around a handful of Wall Street firms and leading American families. One name above all others in steering the country towards full-blown fascism stands out above all others: Bush. For over seventy years and three generations, the Bush family has been hard-core supporters and advocates of fascism.

With the record of the current Bush regime a short excerpt from the first leaflet of the White Rose Society, a small group of students who dared to oppose Hitler and the Nazis bears repeating.

"Nothing is so unworthy of a civilized nation as allowing itself to be governed without opposition by an irresponsible clique that has yielded to base instinct. Who among us has any conception of the dimensions of shame that will befall us and our children when one day the veil has fallen from our eyes and the most horrible of crimes - crimes that infinitely out-distance every human measure - reach the light of day?"

Who will survive to bear witness this time? 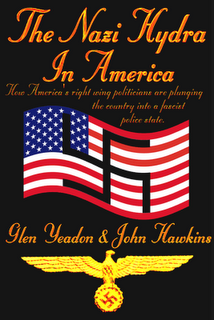