The Leafets Of The White Rose Society

'So many people have already died for this regime that it's time someone died against it.' -- Sophie Scholl - Nazi resister.

Sophie Scholl and her brother Hans were members of the White Rose Society in Germany under Hitler's reign. The society published and disseminated anti-Nazi literature, and for these crimes, the Scholls were guillotined.

"The family, in accordance with Nazi custom, was placed under arrest for being related to the malefactors."

From their first published leaflet:

"Hitler states in an early edition of "his" book (a book written in the worst German I have ever read, in spite of the fact that it has been elevated to the position of the Bible in this nation of poets and thinkers): "It is unbelievable, to what extent one must betray a people in order to rule it." If at the start this cancerous growth in the nation was not particularly noticeable, it was only because there were still enough forces at work that operated for the good, so that it was kept under control...

Who among us has any conception of the dimensions of shame that will befall us and our children when one day the veil has fallen from our eyes and the most horrible of crimes - crimes that infinitely outdistance every human measure - reach the light of day? If the...people are already so corrupted and spiritually crushed that they do not raise a hand...if they are so devoid of all individuality, have already gone so far along the road toward turning into a spiritless and cowardly mass - then, yes, they deserve their downfall...[I]t would appear...that they are a spineless, will-less herd of hangers-on, who now - the marrow sucked out of their bones, robbed of their center of stability - are waiting to be hounded to their destruction. So it seems - but it is not so.

Rather, by means of a gradual, treacherous, systematic abuse, the system has put every man into a spiritual prison. Only now, finding himself lying in fetters, has he become aware of his fate. Only a few recognized the threat of ruin, and the reward for their heroic warning was death...If everyone waits until the other man makes a start, the messengers of avenging Nemesis will come steadily closer; then even the last victim will have been cast senselessly into the maw of the insatiable demon. Therefore every individual...must defend himself against the scourges of mankind, against fascism and any similar system of totalitarianism. Offer passive resistance - resistance - wherever you may be, forestall the spread of this atheistic war machine before it is too late, before the last cities, like Cologne, have been reduced to rubble, and before the nation's last young man has given his blood on some battlefield for the hubris of a sub-human. Do not forget that every people deserves the regime it is willing to endure."

In the pamphlets, they emphasize that the German state has distorted the "dictates of evil", in which "the ruling all inhabitants gradually rob, in the public and private spheres, of one right after another, until one day there is nothing left but the state machinery that commands criminals and drunkards'. At the same time, they oppose the tacit tolerance of such practices and call on their fellow citizens to take action. Members of the White Rose they wanted to stop the war and therefore called for the sabotage of the arms industry and all NSDAP activities, including public rallies. The German inhabitants have to put all sorts of obstacles in the state war machine and try to convince their acquaintances that it is not meant to continue the war. They also point out that the Germans became the spiritual and economic slaves of the NSDAP, which caused the destruction of all moral and religious values. For the reasons described above, they call on the Germans to passive resistance.

In January 1943, the group felt relatively strengthened and had some hopes, as its activities seemed to be bearing fruit and leading to debate among the young. Members of the White Rose believed that change in the country was within reach. The terrifying defeat of the German army at Stalingrad represented a turning point on the Eastern Front, thanks to which the protesting voices at the University of Munich were increasingly heard. The group worked even harder, and slogans such as "Away with Hitler" or "Freedom" began to grow on the walls of Munich. In the sixth pamphlet, the group calls on young people to rise up, bring down German tyrants (ie German tyrants) and establish a "new intellectual Europe".

Students! The Germans are looking at us! The responsibility lies with us: just as the power of the spirit broke the Napoleonic terror in 1813, so does the terror of the National Socialists in 1943.

Hans and Sophie Scholl distributed leaflets with this content around the University of Munich on February 18 so that their classmates could find them as they walked through the school between lectures. At one point, probably so that even more people would notice the leaflets, Sophie from the upper floor dropped a whole stack of leaflets over the railing down into the main hall area.

This moment became fatal for everyone. A janitor, an ardent supporter of Nazism, spotted her and had both siblings arrested by the Gestapo. As Hans also had a finished version of Pamphlet No. 7 in his bag, Christoph Probst was arrested the same day. After long interrogations, a staged trial took place, during which all three confessed to their actions under the banner of the White Rose - in the hope that this would save other friends. However, this hope soon faded, as Willi Graf, Alexander Schmorell, and Kurt Huber were arrested in February 1943 and executed soon after.

After a half-day trial, presided over by the infamous Roland Freisler, Hans Scholl, Sophie Scholl, and Christoph Probst were found guilty of high treason and sentenced to death. However, Sophie did not back down from her convictions, even under duress. Just a few hours later, on February 22, 1943, at 5:00 p.m., all three were executed by guillotine. According to eyewitness accounts, Sophie Scholl died to death with great courage. Her last words in history were:

Such a beautiful, sunny day and I have to go…

What will happen to my death when, thanks to us, we manage to wake up thousands of people and move them to action? 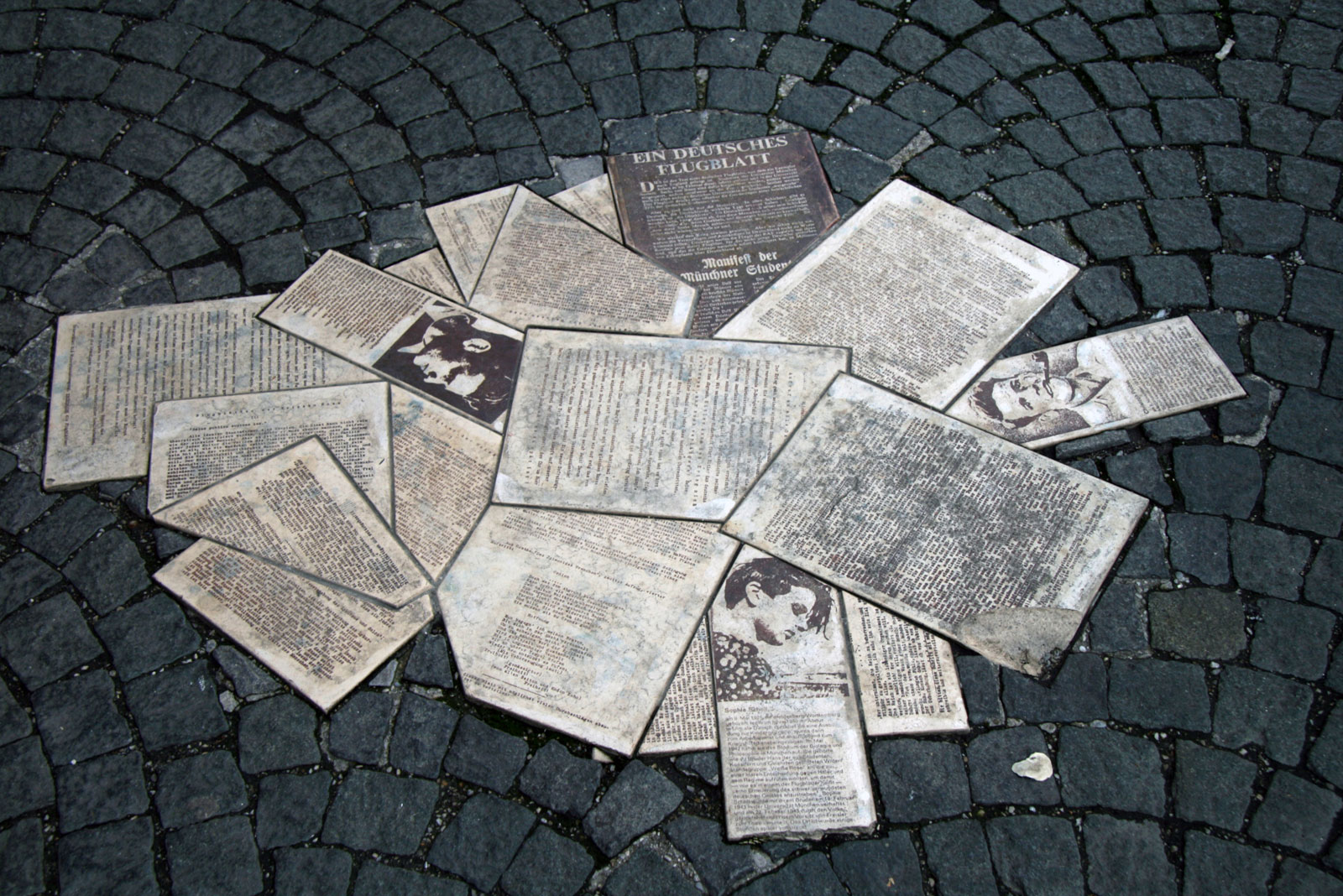