When he was wooing Germany's wealthiest industrialists and plutocrats and the Reich Association of German Industry (roughly the equivalent of our own U.S. Chamber of Commerce, and as virulently right-wing), Hitler told Gustav Krupp and his union-hating cronies that "private ownership of the means of production could only be ensured once democracy was destroyed" and he made it very clear that that was precisely what he intended to do if he ever won the presidency. Krupp became the Nazi Party's top fundraiser and the Chairman of the Adolf Hitler Fund. He was the David Koch of his day. In Nazi Hydra In America, author Glen Yeadon points out as explicitly as could be done that "by choosing to finance the March 1933 elections for the Nazis, Big Business became a full partner of the Third Reich. The support came at a crucial time for Hitler. If business leaders had withheld their support, Hitler's government would have failed."

For some reason-- for the life of me I just can't imagine why-- this pledge of Hitler's to destroy democracy for the sake of an extreme form of unfettered Law of the Jungle capitalism, made me recall a passage about the College Republicans of the 1960s in Rick Perlstein's epic work, Nixonland.

One especially nasty operator was loaned by the College Republicans to the campaign to defeat the Democratic candidate for state treasurer in Illinois in 1970, Al Dixon. Dixon was having a formal reception to open his Chicago headquarters. This kid assumed an alias, volunteered for the campaign, stole the candidate's stationery, and distributed a thousand fake invitations-- they promised "free beer, free food, girls and a good time for nothing"-- at communes, rock concerts, and street corners where Chicago's drunken hoboes congregated. The kid's name was Karl Rove. The RNC soon hired him at $9,200 a year to give seminars on his techniques,

Republicans like Rove scream the loudest about election theft because they can't imagine that the Democrats don't think exactly the same way they do: cheat, cheat, cheat. Republicans, just like right-wing parties throughout history and across the globe, have no respect for democracy or democratic means. They really are the enemies of mankind. 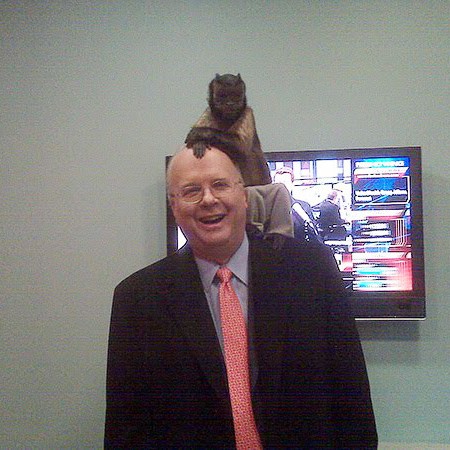