The Sturm Abteilung der NSDAP (SA, assault battalion of the Nazi party) ñ created in August 1920 ñ were squads of strong arms intended to protect the Nazisí meetings, to provoke a disturbance, to break up other partiesí meetings, and to attack and assault political opponents as part of a deliberate campaign of intimidation.

After 1925 the name Braunhemden (Brownshirts) was also given to its members because of the color of their uniforms. Under the leadership of Hitlerís close political associate, Ernst Rˆhm, the SA grew to become a huge and radical paramilitary force.

In 1920 the newly formed German Workersí Party needed its own militia group to protect party members from hecklers and opponents. Some Freikorps members joined the party and took on this role. One such person was Ernst Rˆhm, a former Bavarian Army Captain. Originally called Ordnertruppe, they were re-formed as the Turn-und Sportabteilung (Sport and Gymnastic Division).

On 4th November 1921, the Nazi party held a large meeting. Large numbers of demonstrators against Hitler and the Nazi Party were prevented from disrupting the meeting by the Turn-und Sportabteilung. Following this event, they became known as Sturm Abteilung (Stormtroopers) abbreviated to SA.

Hitlerís Stormtroopers wore a uniform of khaki brown shirts with swastika armband on left arm, khaki brown trousers with, brown belt, brown combat boots, and khaki brown peaked cap with red trim. They were often called by the nickname Brownshirts because of the brown shirts they wore.

Following the failed Munich Beer Hall Putsch in November 1923 and the subsequent imprisonment of Adolf Hitler, the SA was banned from April 1924 to February 1925. To combat the ban the SA changed its name to Frontbann. Ernst Rˆhm who had not been imprisoned but had been discharged from the army became leader of the Frontbann. When Hitler was released from prison Rˆhm, who disagreed with some of his policies handed over the leadership to Wolf Graf von Helldorf and three years later, in 1928, emigrated to Bolivia.

In November 1926 Franz Felix von Pfeffer von Salomon took over the leadership. Von Salomon wanted to increase power for the SA by securing seats in the Reichstag. Hitler refused to allow the SA to play any part in government and von Salomon resigned in August 1930.

In 1931 Hitler asked Rˆhm to return and lead the SA. Rˆhm agreed and upon his return, he quickly increased the membership of the SA. After the Nazis came to power in 1933 Rˆhm began to make moves towards merging the SA with the German army. It was his intention to become the head of the military forces in Germany. In January 1934 Rˆhm sent a message to the Minister of Defence, Werner von Blomberg, demanding that the SA replace the Reichswehr. Blomberg, who was already concerned about the growing power of Rˆhm and the SA joined forces with Heinrich Himmler, Hermann Goering, and Reinhard Heydrich against Ernst Rˆhm. A dossier was compiled that offered evidence that Ernst Rˆhm was secretly plotting to overthrow the Nazis and take power for himself and the SA.

Presented with the ëevidenceí, Hitler had no choice but to take action and on 30th June 1934, the Night of the Long Knives saw the murder of leading members of the SA. The action, which saw the deaths of leading SA members was legalized by Hitler on July 13th when he made a speech, which was approved by the cabinet, stating that the Night of the Long Knives was an act of self-defense against the state.

After the Night of the Long Knives, the SA continued in existence but with a much-reduced membership as young men chose to join the regular army rather than the SA. The rise of the SS, Schutz Staffel, led by Heinrich Himmler saw the elimination of the SAís power. 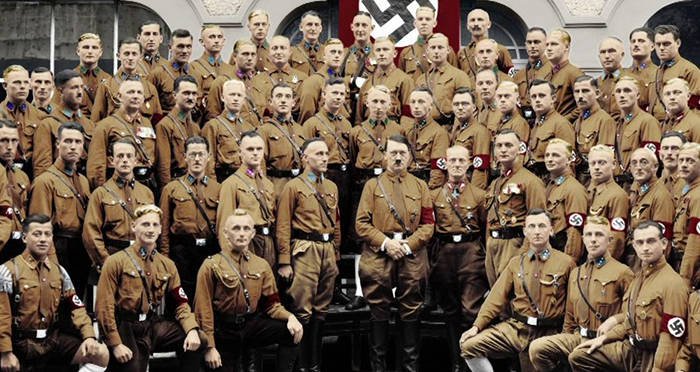