The Failure Of The FBI During The Early War Years In America:

The day Hitler unleashed his Panzer forces against Poland marked the formal beginning of World War II: September 1, 1939. War would lash across the European continent for another 6 years---a new war so horrific millions would perish as a result. It was a brutally savage war; over six million Jews perished in the Holocaust alone. For the first time in history, an entire civilian population could be targeted for destruction, a feat made possible by new technology. War would spread into North Africa, China and engulf the South Pacific.

No single event of the twentieth century brought forth more geopolitical changes than WWII. Virtually every country of Europe saw a change in government during or after the close of the war. Nor was the change in governments confined to Europe. New governments and nations were born worldwide as the British Empire dissolved away. The United States was propelled from the position of a second-tier nation to that of one of the two superpowers and a world leader.

Domestically it brought forth a sea of changes. For the first time in history, the United States would maintain a large standing army. As the only allied country to escape large-scale damage, it catapulted the U.S into an economic powerhouse. Moreover, with the fears of the red menace re-ignited, the United States bid farewell to an isolationist policy, choosing a proactive interventionist policy verging on imperialism.

For America, the war did not begin until Dec 7, 1941, the "day of infamy." For Americans, it was a two-front war perhaps, best symbolized by the Marines raising the flag on Mount Suribachi and GIs wading ashore at Normandy. For those Americans that lived through the war, it meant ration cards, collection drives for scrap metal and other materials in short supply, and images of Rosie, the Riveter.

It is this home front of the war that is grossly misunderstood by Americans today. Most Americans believe incorrectly that the country was totally united in its war efforts, yet nothing could be further from the truth. The native fascists remained active and considerable opposition to war existed in the halls of Congress. The war effort was hindered by the numerous cartel agreements between American corporations and I.G. Farben. Although the native fascists were unable to create widespread racial strife, they were successful in creating enough turmoil domestically to hinder the war effort.

In order to understand the many events of WWII both on the battlefield and on the home front a brief look at the Allies’ deadliest weapon is needed. The marks of this weapon were behind every headline throughout the war and traces of its presence can even be found in domestic events on the home front. This remarkable weapon fired no and dropped no bombs; it simply was our ability to break the Japanese code. Nevertheless, wrapped behind a shroud of secrecy Magic was undoubtedly the Allies’ ultimate weapon.

Although every student of WWII knows of the importance of Magic, few know of the bizarre and childish manner in which the military branches handled the information it yielded. Frank Rowlett of the Signal Intelligence Service broke the Japanese code on September 20, 1940. The rivalry between the army and navy led to a bizarre routine in which the information was passed onto Roosevelt. The traffic over Magic was too great for the army cryptanalysts to handle alone. Thus, the naval code breakers shared in the task of decrypting the messages. Each service had an officer, who decided which messages were passed onto the administration. This task fell to the army’s Colonel Rufus Bratton and the Alwin Kramer of the navy. Distribution was limited to the president, secretaries of state, war and navy, the Army Chief of Staff, the directors of military intelligence and naval intelligence, and the chiefs of naval operations and war plans.

The bizarre nature in which the decrypts were delivered to FDR arose from the intense rivalry between the navy and army. After a prolonged dogfight between the two branches of the military, a solution of sorts was reached. On odd-numbered months the decrypts would be delivered to the president by an army courier; on even-numbered months a naval courier would deliver them.

The level of absurdity would soon increase in July 1941. In June of 1940, Colonel Bratton noticed a decrypt of magic in Pa Watson’s wastebasket. Watson was FDR’s military aide and was in charge of appointments. He alone determined who would see the president. Watson had indeed been careless with the decrypt and was not on the list of those approved to see Magic decrypts. The overzealous colonel reported Watson’s carelessness to his superior General Sherman Miles. The general then determined that the White House could no longer be entrusted with the decrypts. For the remainder of June FDR received the decrypts from the naval courier. However, starting in July the army delivered no decrypts to the White House. By August, the navy had managed to work out a new agreement with the army. The naval courier would read the decrypts to the President and then summarize them, however, he was prohibited from showing the actual decrypt to the President.

A more serious leak arose inside the State Department. According to the Magic distribution scheme, only the Secretary of State Cordell Hull was to receive the intercepts. Hull, however, distributed copies to six of his top aides. One of whom shared the decrypts with four additional members in the Far Eastern Division. With so many copies to be distributed inside the State Department, multiple copies were mimeographed. Joseph Dugan was the man in charge of the mimeograph room and was a strict isolationist opposed to FDR. Dugan would discuss and even show them decrypts to a friend of his inside the State Department. Dugan’s friend, however, was in the pay of Hans Thomsen, the German charged affairs in Washington and had conspired to fix the election in 1940. Thomsen reported to Berlin that the Americans had broken the Japanese code. 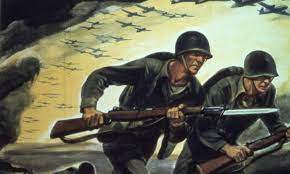